BlackBerry's popular instant messaging platform, BlackBerry Messenger or BBM has finally landed on non-BlackBerry OS platforms, Android and iOS, after a delay of more than a month.

BlackBerry had paused the rollout of the app after an unreleased version of the BBM for Android app leaked online prior to the app's official release on the Play Store, 'which resulted in volumes of data traffic orders of magnitude higher than normal for each active user and impacted the system in abnormal ways'.

Even the current rollout is based on a waitlist with access being granted first to users with a BlackBerry ID, and to people who registered their email address at BBM.com. Here's our initial take on the BBM for iOS app.

BBM is a free download from the iTunes App Store (and Google Play store) (download/waitlist links if possible) and anyone can sign up for the service through a BlackBerry ID which is required to log-in into the app. If you don't have a BlackBerry ID, you can create one by providing your email ID and choosing a password. 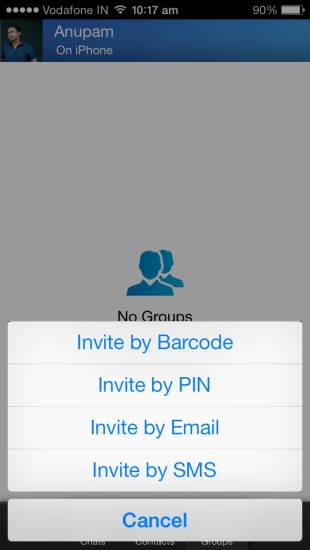 After signing-in, the BBM for iOS app assigns you a PIN in a manner similar to BlackBerry Messenger on BlackBerry links with the phone's unique PIN number. It's worth pointing out that if you sign-in to BBM on another device with the same BlackBerry ID, it will ask you if you'd like to switch the account to the new device. So, one ID can be used only on one device.

You can then add friends by sharing your PIN with them via SMS, email and social networks in addition to QR codes. It's worth pointing out that they'll first need to add you in order for you to send them messages via BBM. Even if two iPhones have the BBM app installed the PIN would first appear in Messages and requires other the user to manually enter it. BlackBerry mentions that this 2-way opt-in is in fact a security feature giving you control over who adds you.

The BBM for iOS app looks like it's been just ported from a BlackBerry 10 device in terms of the user interface, complete with swiping to the right gesture, to reveal a slide out menu for Chats, Contacts, Groups, Updates and Invites. 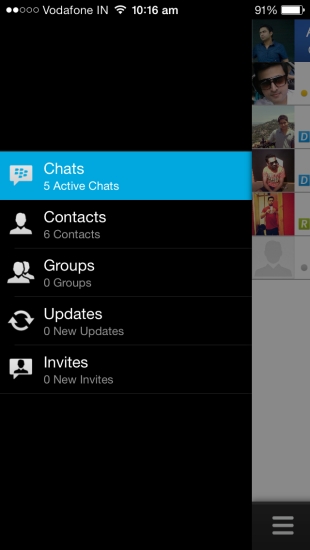 Coming to the messaging part, you can chat with a single user, in groups where you create or join a group and chat and even be in a group with people who aren't part of your BBM contact list (this happens when one of your contacts invites you to a chat where that person's contacts are also chatting), or send one message to a number of people. Up to 30 people can be added in one group chat.

It's worth pointing out that only text, emoticons, voice notes and pictures can be shared in chats, at this point in time. We tried sending documents including PDF files from a BlackBerry phone but the transfer failed. 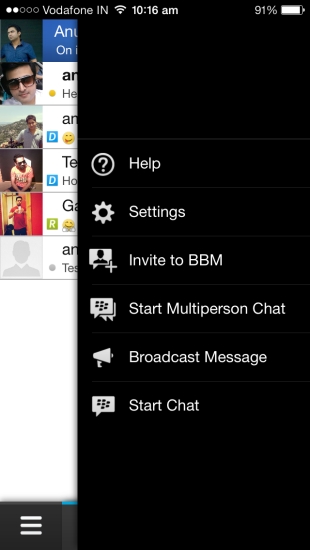 Other than that, we were able to send and receive messages without a hitch. The app lets you know if your message has been delivered and even read by the other users by placing a 'D' and 'R' sign next to the message. It also lets you know when the other person is typing a message and nudge them with a Ping alert.

Unlike other chat apps such as WhatsApp, Line and WeChat, BBM doesn't support video file transfers and sharing contacts. It also doesn't offer push to chat, however BlackBerry mentions that BBM Voice (voice chat) will also be introduced to BBM for iOS and Android, in the future, in addition to BBM Channels (broadcast groups)  and BBM Video (video chat).

On its native BlackBerry OS platform, BBM offers voice calling through BBM Voice and video chat through BBM Video (only on BlackBerry 10). If you're part of the Beta zone, you also get access to Channels. It allows sharing files other than just pictures, location, contacts and appointments.

It would be interesting to see how BBM evolves and competes with other messaging apps, as the playing field is now much wider. Overall, it's an efficient port, with a few transfer limitations that will hopefully be ironed out after the rollout is complete. 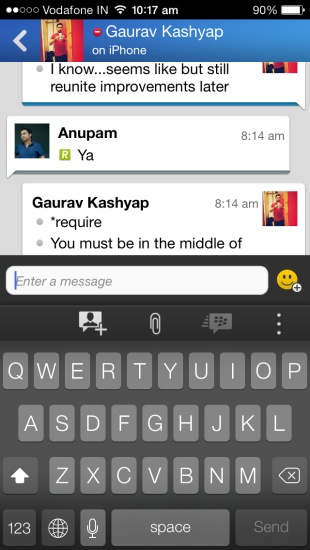