People are uninstalling both UberEats and Uber apps. 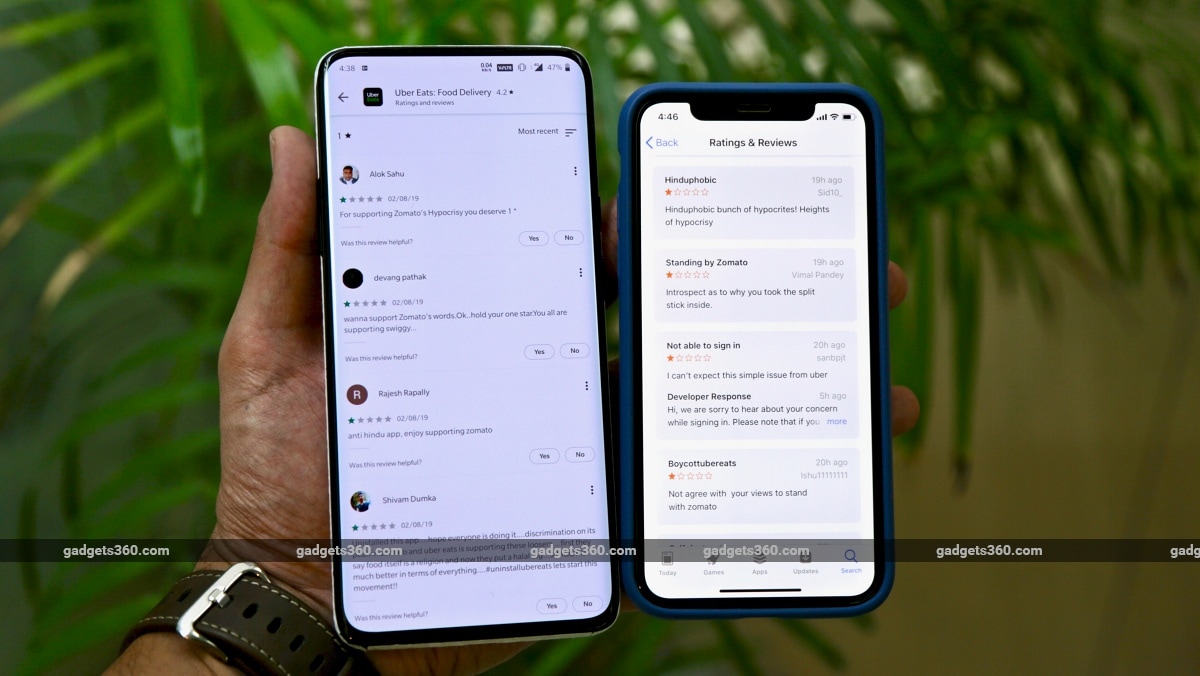 UberEats has been caught in the crossfire of the “non-Hindu rider” case after the food delivery service tweeted in support of Zomato. A number of Android users are leaving 1-star reviews for UberEats on Apple App Store and Google Play Store, after doing the same for Zomato. The #BoycottUberEats was also trending on Twitter in India yesterday. This is not all; people are also uninstalling Uber app from their smartphone to voice their disapproval of UberEats' support for Zomato.

App Store and Google Play Store listings of UberEats and Uber are filled with 1-star reviews and messages about how people are uninstalling the app. UberEats on Tuesday had tweeted that it stands by Zomato in the recent “non-Hindu rider” row and while the service received praise from a number of users for its stance, it also faced the ire of a section of consumers. Soon, #BoycottUberEats was trending and people started uninstalling both UberEats and Uber.

Meanwhile, Amit Shukla, who refused food delivery from a “non-Hindu rider” and started this whole saga, was sent a notice by Madhya Pradesh Police for violating constitutional provisions. Police has reportedly started the process of obtaining a legal binding promise from him that he won't do anything that might lead to breach of peace. Amit Shukla will have to sign a bond under Section 107/116 of Code of Criminal Procedure (CrPC), 1973.

"If in the next six months, he again makes any such tweets or commits any such act which is against basic tenets of the constitution or worthy of disturbing public peace or communal amity, then he will automatically be sent to jail," Jabalpur district police superintendent Amit Singh told NDTV.

Amit Shukla on July 30 had tweeted that he had cancelled an order made via Zomato's food delivery service after the company assigned a "non-Hindu" executive to deliver his food. Shukla had apparently asked Zomato support to change the executive as he "didn't want a delivery from a muslim fellow" and when the company refused to change the executive saying it “[doesn't] discriminate” among riders, the person asked Zomato to cancel the order. Shukla's Twitter account has since been deleted.

After Shukla's tweet, Zomato defended its decision to not change the food delivery executive and wrote on Twitter: “Food doesn't have a religion. It is a religion.” Zomato founder Deepinder Goyal also pitched in by saying that Zomato doesn't regret losing the business of such customers.