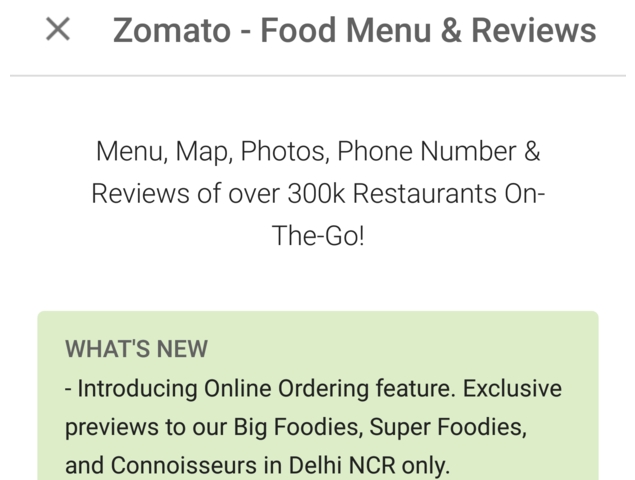 Food discovery platform Zomato has been promising to expand into a number of different areas, including online ordering, table bookings, and cashless payments, and a fresh update to the app shows that it has finally taken the leap. Zomato has been talking about entering the online ordering space for months now, and in March its CEO Deepinder Goyal announced in a Reddit discussion that Zomato would start accepting orders in one week.

Now, while Zomato has not officially confirmed the news yet, in the release notes for the update to the Android app, the first point is: "Introducing Online Ordering feature." Similarly, the iOS app update also has Online Ordering in the release notes, along with Apple Watch support. On iTunes, it states that the feature is currently available in Delhi NCR, with Bengaluru, Mumbai, and more cities on the way, but on Android it only mentions Delhi NCR.

Last week, Goyal also tweeted a picture of stacks of iPads, which will be deployed at partner restaurants for the online ordering, which tells us a little bit more about the logistics that Zomato will be employing to manage its delivery service.

Loads of iPads arriving every hour to deploy at restaurants for our online ordering launch. Coming soon to @Zomato! pic.twitter.com/oOlm84EUSC

Gamifying deliveries
When we checked the app, there was a new '+' button in keeping with Google's Material Design. Tapping the button gives you various options - you can check in, write a review, upload a photo, or, order online. When we tapped order online, we were shown a list of four restaurants in our area which were able to deliver food to us, compared to 80 restaurants on Foodpanda.in, so there is clearly room for growth right now. Also, the only payment option available right now is Cash on Delivery, which might also not suit all users.

We have reached out to Zomato for more details of online ordering and partner restaurants.

The key difference in Zomato's platform when compared to the competition could be in the way the company plans to gamify the commissions that it will charge from restaurants, in a bid to deliver the best customer experience. After each order is completed, you will have to rate the experience on the app before you can place another order - much like you have to do when using taxi apps.

At the time, Goyal had talked about cashless payments being the next step for Zomato, before deliveries. "Check-in is a precursor to pay at the restaurant," Goyal had said. "It's like Uber, you check-in, and enjoy your food, and leave. You don't need to call for the bill and take out your credit card. And tagging will let you split the bill among friends." The company has introduced cashless payments in Dubai already, but not in India so far.

Goyal and Zomato co-founder Pankaj Chaddah have both told us that the company is waiting for 2-factor authentication norms for small amounts to be relaxed before bringing in payments in India.