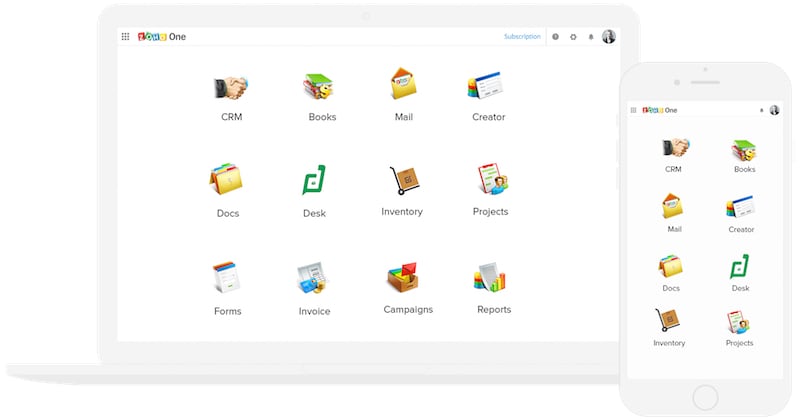 Chennai-based Zoho, which is known for its suite of enterprise apps, has been aggressively taking on giants such as Salesforce for years now. The company has now launched a suite called Zoho One, which it terms as an operating system for businesses.

Zoho One offers 38 Zoho apps, all bundled under one suite, at a price of Rs. 1,000 per employee per month. This is the price for India and the global price is $30 per employee per month. Once an organisation has signed up for Zoho One, all of its employees can use all Zoho apps in the suite at no extra costs. The catch here is that Zoho wants the entire organisation to sign up for the service, and not just for a few employees.

While Zoho One includes lots of apps from the company’s suite, it doesn’t have apps such as Zoho CRM Ultimate Edition, Zoho Creator Express Plans, domain registration, and a few others.

Zoho CEO Sridhar Vembu told Gadgets 360, “Zoho One has been in the works for over 10 years. It’s only possible if you build a foundation for the entire suite. We wanted to provide an entire operating system for businesses.”

Vembu said the company has been surprised by the response to Zoho One so far, particularly because larger organisations have expressed an interest in the suite. “Over 300 organisations have already signed up for it before the product has even launched,” Vembu said.

Technology oriented companies are the largest category of customers for Zoho. Vembu says companies using a similar suite from other companies have been paying a minimum of $200 per employee per month. The companies that are ready to switch are already on Salesforce or other software, he says. “Whenever they have to add employees (to the company), the price is so heavy that they have to ration software,” Vembu said.

Uber Driver Profiles Rolling Out In India, Aimed at Providing More Information
Valerian Movie Review: An Empty Love Parable in the City of a Thousand Planets