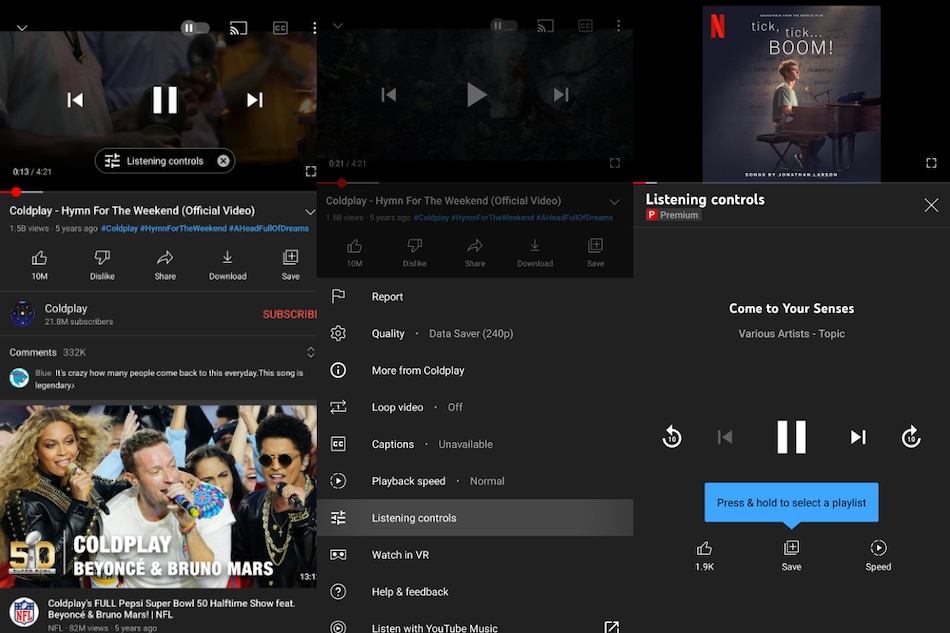 YouTube is reportedly rolling out ‘Listening Controls' feature for Android and iOS users who are YouTube Premium subscribers. The new feature gives users additional controls while listening to music on the platform. It lets you play, pause, forward and even rewind videos. This new feature, when activated, will replace everything that shows up underneath the video and will remain even when you switch to a new video. Using the listening controls, YouTube app users can also save new songs to a playlist if they prefer.

9to5Google reports that listening controls feature is now available for YouTube Android and iOS users widely. The report adds that the feature is only rolling out to YouTube Premium users. It is said to be available for US users at the moment. The new feature can be accessed by clicking on the three-dot icon on the top right corner of the YouTube video. Select ‘Listening Controls' from the options that pop up from the bottom.

The new Listening Controls widget is said to take the place of everything that shows up at the bottom of the YouTube video inside the Android and iOS app. It offers controls to play and pause a video, go to the next one or switch back to the previous one. Fast forward or rewind 10 seconds of the video, and even save it to a playlist. The like button is offered on the Listening Controls widget as well. The report adds that the listening controls are persistent and remain even when users switch to a new video from the Home feed, search, etc.

For those who want to hide the ‘Up next' and comments feed from their YouTube for Android and iOS apps, can take advantage of the listening controls feature. However, this feature is only available for paid subscribers as of now. There is no clarity on whether it will be made available to free users in the future.