YouTube says that new features will make it easier for users to watch videos. 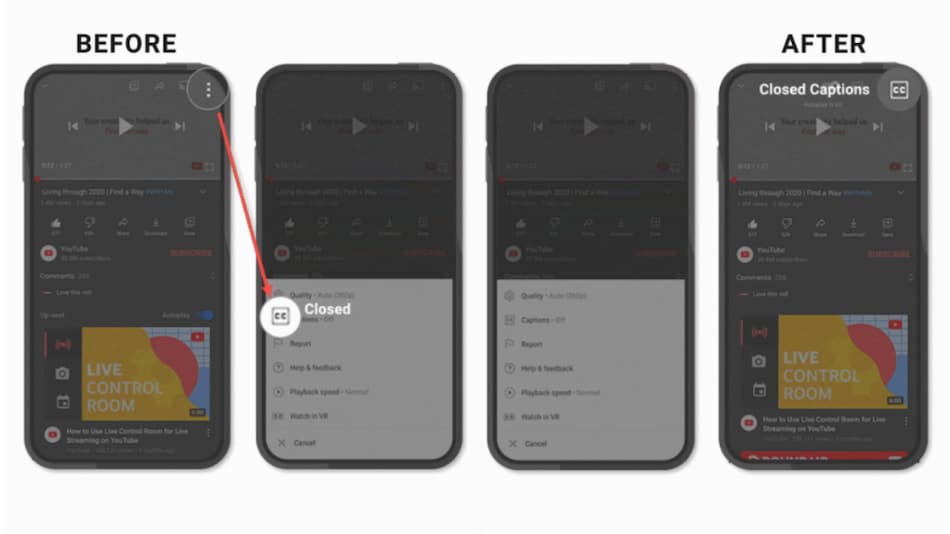 YouTube has started to roll out a few tweaks to its Android and iOS apps to make it easier to watch and interact with videos on the platform. These include a more streamlined player page and gestures to control the playback options. The player now has rearranged buttons and moved them to a prominent location which is said to save time while taking actions. Similarly, gestures are aimed at making YouTube more efficient. It has expanded 'Video Chapters' to allow users to see a complete list of all chapters included in the video being watched.

According to a blog post by YouTube, the company has introduced five major changes recently. The prominent ones are a more streamlined player page that is aimed at saving time as well as delivering a better video watching experience, and gesture controls which allows YouTube to be more efficient while you're watching videos.

The first change that users will notice is the rearranged caption (CC) button to a more prominent location in the mobile video player. This is aimed at making captions more accessible and they can easily be turned on/ off instantly. Further, the YouTube autoplay toggle has also been moved beside the CC button on the top right corner of the player where you get the Chromecast button.

YouTube autoplay toggle has also been moved on the top right corner of the player
Photo Credit: YouTube

YouTube says that it will be testing the rearranged autoplay toggle design on Desktop soon. Apart from the above mentioned changes, users may also be able to notice improvements like re-arranged buttons that are said to give the player a simplified look.

The video sharing platform now offers more gestures to allow people to have more control over what they are watching. YouTube already has a double tap gesture to fast forward or rewind the video for 10 seconds, and now YouTube has added swipe up and swipe down gestures to enter and exit full screen mode, respectively. Users can now simply swipe up on the video player and the video will start playing on full screen in landscape mode. Swipe down, and it will go back to the portrait mode.

YouTube has also extended the Video Chapters feature that allows users to click within the player to get a list view. Users will be able to see a complete list of all chapters “included in the video that they are watching, each with a preview thumbnail of what you'll find in that chapter”. Furthermore, YouTube has started to roll out suggested actions, which prompt users to rotate their phones or play a video in VR for a better experience. The company plans to introduce more suggested actions in the future.