YouTube Gets a New 'Music' Section for Android, iOS, and the Web 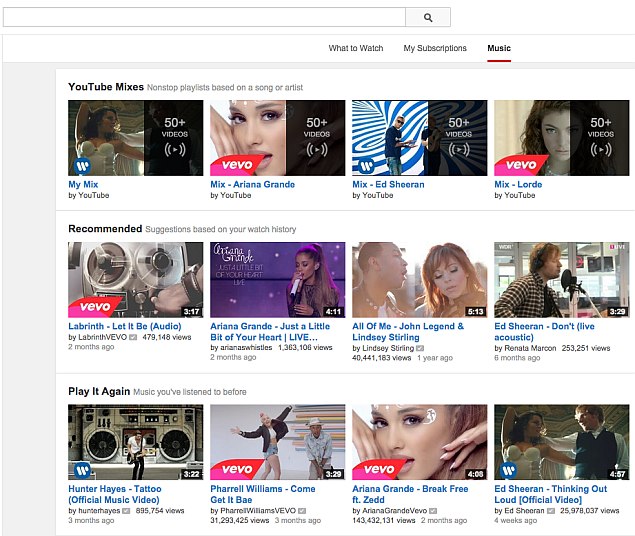 After introducing the YouTube Music Key subscription service on an invitation-only basis, Google on Wednesday has updated its Android and iOS apps, as well as its Web interface, to introduced a new section (homepage or tab) named Music.

The new YouTube Music section lets users view a number of mixes or playlists of music videos recommended based on their listening history and preferences. Recommended playlists will also be available based on what is trending on YouTube. Notably, the feature on the Web-interface was introduced as YouTube Mixes earlier in the year, but not under its own section. The Web interface also features Recommendations, Play It Again, Trending Music Videos and Top Music Videos by Genre sections (visible differently depending on region), each with their own set of mixes.

The YouTube apps will also allow users to listed to YouTube Mixes based on songs or artists, and play albums via the search interface. YouTube, on its blog post, added that soon users would also be able to view an artist's discography on the portal and play their official videos and high-quality audio tracks added by partners. 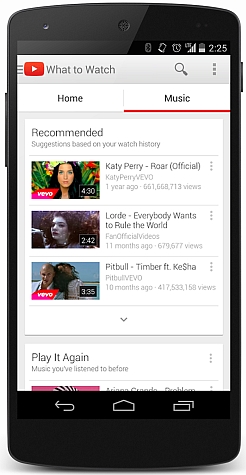 "Starting today, you'll see a new home just for music on your YouTube app for Android, iOS and on YouTube.com that shows your favorite music videos, recommended music playlists based on what you're into and playlists of trending music across YouTube," added the YouTube blog post on November 12.

While the updated YouTube app (v2.16.11441 for iOS) with the new Music section is already available to download for iOS users from the App Store, it is yet to reach Google Play India for Android users. The Whats's New section of the App Store listing reads, "Music on YouTube is better than ever. Find your favorite videos and get recommendations on a new music homepage, listen to an endless YouTube Mix based on your favorite song or artist, and play albums right from search."

Notably, YouTube's new Music section, when used by subscribers of the recently introduced YouTube Music Key service, will offer them full music albums when offline without any advertisements. The Music Key subscription service is however in beta mode currently and the users would need an invitation to experience the service right away - those who receive invites will also get the first six months free.

The YouTube Music Key service, priced initially at $8 (roughly Rs. 500) a month, is comparable in cost to other digital music subscription services sold by Spotify, Apple Beats Music, and Google's own 18-month-old streaming service (Google Play Music All Access) tied to the Google Play store. But Music Key subscribers will be able to stream through the Google Play Music All Access service at no additional charge, too. The after the promotional price ends, it will be priced at $10 (roughly Rs. 620) a month.