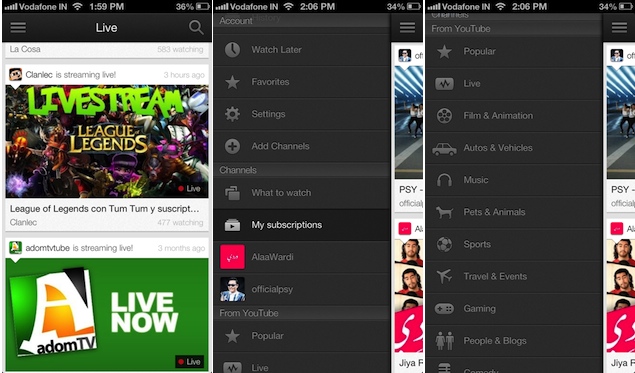 iOS users will finally be able to watch live streams via the native YouTube app. Google has updated the YouTube app for iOS bringing access to live video streams, in addition to bringing some other new features.

The update(version 1.3) brings quick access to new uploads from subscriptions via "My Subscriptions" feed on the Guide, the ability to queue up videos to play on TV, and one Channel branding for video creator channels, in addition to stability and performance improvements.

Last month, Google had updated the YouTube app for iOS users with the 'send to tv' option that now allows them to automatically send videos  from their iPhone, iPad or iPod touch devices to their smart televisions. It also lets them send YouTube videos to the Xbox and the PlayStation 3, after a manual pairing process. Once paired, users can use their iOS devices to remotely control the videos playing on-screen. All they need to do is open a video and tap the onscreen TV icon on the top right corner and it will prompt them to select the device they'd like to view it on. Once done, the video plays on the preferred choice of screen.

It also allowed users to pause, scroll and navigate to the next video as it plays on the TV. They can also find another video to watch or browse the Web on their device, while the video plays.

Besides this, the video sharing service had also added YouTube Capture support within the native app allowing for recordings and uploads, in addition to bringing improved streaming over slow Wi-Fi connections along with other stability improvements.

With the roll out of iOS 6, Apple had decided to remove the original YouTube app, however, Google released a new version of the app for iOS, that featured advertising before the roll out. The pre-installed YouTube app - which was actually built by Apple using YouTube standards - was not as full-featured as YouTube's own website, but it was popular.

What's New in Version 1.3
* Quick access to new uploads from subscriptions via "My Subscriptions" feed on the Guide
* Access to Live streams
* Queue up videos to play on TV
* One Channel branding for video creator channels
* Stability and performance improvements
Comments