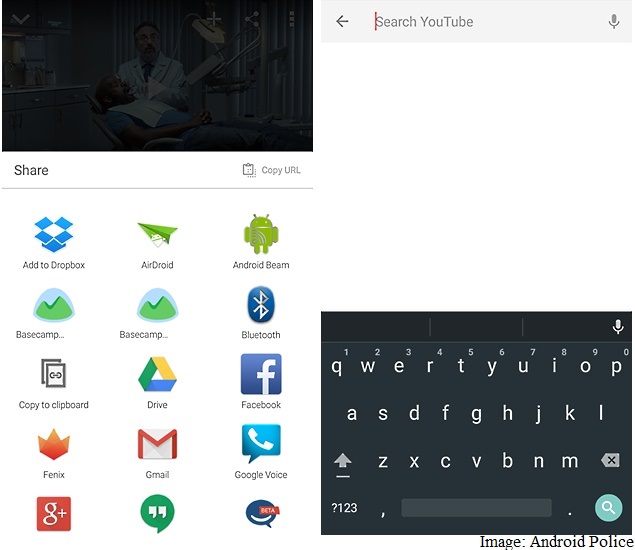 Google on Saturday has started updating the YouTube app for Android devices to version 10.02.3, a straight jump from the version 6.0.13. While the consumer version of the YouTube v10 app for Android include some minor tweaks overall, the app teardown hints towards basic video editing features, filters and more for creators.

The updated YouTube v10 app has been rolled out to few regions, but hasn't reached Google Play India as yet - however, Android Police has the Google-signed apk available to sideload. The video 'Share' menu has been revamped in the app, and it now provides options in a grid as opposed to a list (see above). The top bar of the Share menu now also includes a "Copy URL" option apart from a 'Copy to Clipboard' option in the apps grid below.

With the updated YouTube app for Android, Google has reintroduced the voice search (microphone icon) in the search area. There are few minor tweaks with icons as well, such as the flipped circular 'Replay' icon that is visible after video playback finishes.

While the above changes are noteworthy, what is interesting is that the YouTube app might be getting some basic editing features in future. Groundwork for these features was spotted previously as well, and now the teardown of the YouTube app version 10.02.3 by Android Police reveals more evidence. Previously in November, the Android Police team's teardown had hinted towards the upload video trimming feature in version 5.18.5.

The teardown of version 10.02.3 of the YouTube app for Android features evidence of code added by Google for video filters as well. Some of the filter names discovered from the teardown includes Silver Screen, Glamour, Sepia, 8mm, Docu, Punk, and Sketch.

Other bits of code spotted by Android Police include a simple discovery feature that's meant to connect friends and colleagues on YouTube via their phone numbers. The updated YouTube app features code pointing to an interface to verify the phone number, which is divided in four new layouts.

Another upcoming feature tipped by the teardown of the YouTube v10.02.3 app for Android is participants view in the live chat box. The feature is already available in the Web version of the YouTube, allowing users to see a full list of people participating in the conversation.

Five Emulators for Playing Mario and Other Classic Games on Your Android Phone
LinkedIn Users Being Targeted by Phishing Emails: Symantec