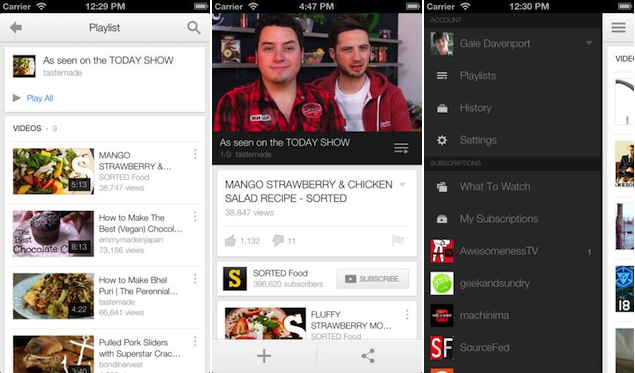 YouTube, the popular video sharing service from Google, has updated its iOS and Android apps, bringing the ability to explore other parts of the app while playing a video, watch videos in playlist back-to-back and new features for using the app with connected devices. The update also brings an overhauled user interface and a new app icon.

The app now sports a redesigned interface in line with Google's other apps, and is inline with Google's cards design, which was first seen in Google Now. Videos now appear as cards with the three dots representing the menu, an element borrowed from the Holo design language. It now looks much cleaner and streamlined. The usual sidebar menu is hidden at the left and can be revealed by swiping to the right or tapping on the menu button at the top.

The app doesn't sport a back button (the iOS app) while playing videos. Instead, there's a new minimise button, tapping on which minimises the video into a small window placed at the bottom right. One can continue to play the video and perform other tasks including searching for content or browsing playlists, simultaneously. The video can also be minimised by just dragging the video towards the bottom right. One can then dismiss the video by swiping to the left or right or maximise it by just dragging it back.

The updated app now supports searching and browsing channels for playlists and the ability to play collections of back-to-back videos.

While the app already supports streaming videos to connected TVs, through Chromecast, Google TV, PlayStation 3 and some smart TVs, it now offers a preview screen when the devices are connected,offering users the options to play the video or to queue it up to watch next.

The updated apps are available for download through the Google Play Store and Apple's App Store.