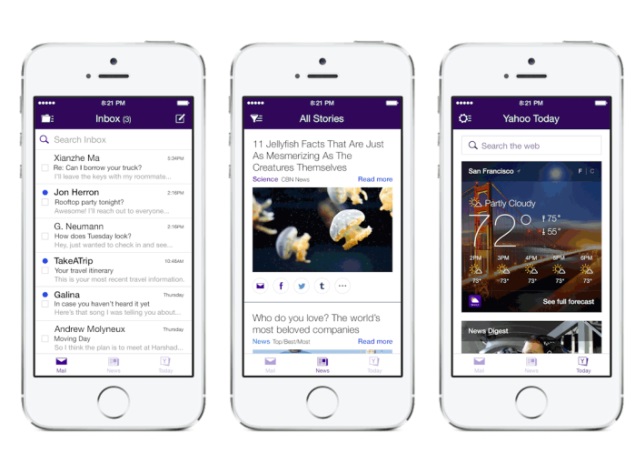 The Internet giant has announced that the new version of Yahoo Mail for iPhone and iPod touch will be rolling out in the App Store for US users over the next couple of weeks.

The updated Yahoo Mail app for iPhone now comes with a new panel that includes options for Mail, News and Today at the bottom of the screen. The Mail panel will show the usual Yahoo Mail inbox, while the second News panel will include a new personalised news stream.

The company is yet to announce the update for Android users, but we can expect the revamped Yahoo Mail app for Android landing on Google Play soon.

Yahoo Mail's Senior Product Manager, Andrew Molyneux on Tumblr said, "We rely on our mobile devices for many things throughout the day - to check email, search, read news, catch up on sports, follow stocks, look up the forecast, and watch videos among others. Today we're introducing a new Yahoo Mail app for iPhone and iPod touch so all the information that's most important to you is right at your fingertips. We've designed it with a focus on simplicity: it's the familiar Yahoo Mail experience, plus one-tap access to personalized, real-time information."

Earlier, Yahoo announced it would be releasing two new comedy series next year in hopes of becoming an even more serious player in Internet video programming.

Yahoo's comedy series are "Other Space," a show revolving around an alternate universe set in the 22nd century, and "Sin City Saints," a show about the front-office antics of a fictional basketball team. Both series will consist of eight half-hour episodes.