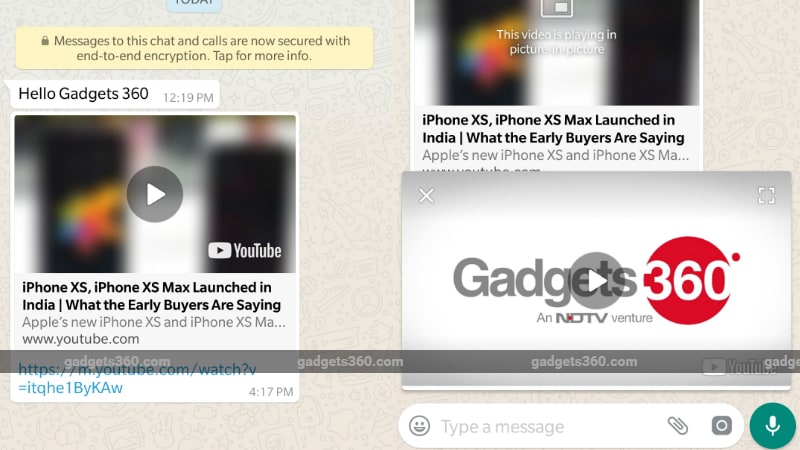 WhatsApp introduced picture-in-picture video feature for iOS users earlier this year, and was reported to be working on a similar feature for Android users as well. Now, PiP support has finally arrived for Android users with beta version 2.18.301, allowing them to watch Instagram, Facebook, and YouTube videos in a small window within the messaging app itself. It essentially means users will not need to go to Instagram or YouTube or Facebook apps to view a video sent by a contact.

With PiP support, Android users will be able to tap on a YouTube link and open up the YouTube video in the app itself. WABetaInfo reports that the feature still doesn't work properly, and when the user leaves the chat, the video stops, something that doesn't happen in iOS. PiP support should essentially allow the user to view the video and continue to navigate around WhatsApp, in different chats, simultaneously. However, PiP support is still in beta for Android users, and therefore all these bugs will probably be smoothened out before a commercial release.

If you have already updated to the latest beta version 2.18.301, but you don't see the feature, back up your chat history and reinstall WhatsApp. Reinstallation will download the most updated configurations from the server, enabling the feature for users. WABetaInfo notes that PiP mode will work on smartphones running on Android 4.4 KitKat and above. It also notes that PiP mode is compatible with Streamable videos as well.

Once all the bugs are ironed out, YouTube, Instagram, and Facebook videos will pop-up in a small bubble, and will come with play/pause, close, and fullscreen buttons. Users will also have the option of increasing and decreasing the size of the video bubble, and the video bubble can be placed anywhere within the app itself. Meanwhile, users should be able to continue texting with your contacts easily.

To download the latest WhatsApp beta on your Android device, you need to be a part of the official Google Play beta programme. Alternatively, you can download its APK file directly from APK Mirror.

Let us know if you see the feature in your Android beta version in the comments below.