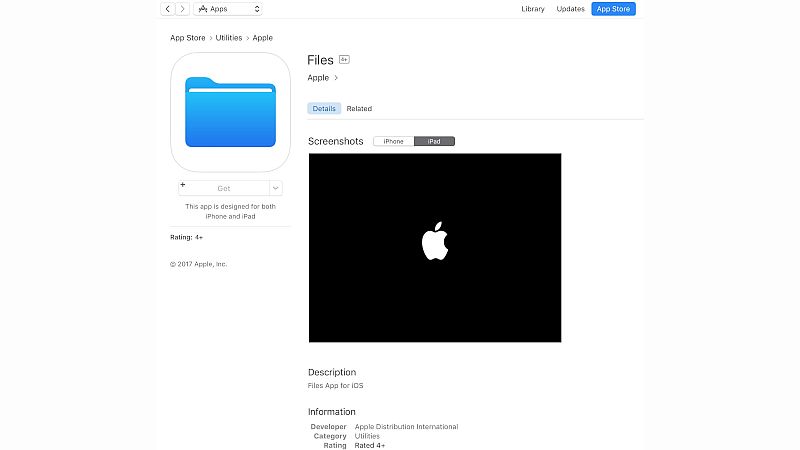 We are merely hours away from the start of Apple's annual Worldwide Developers Conference (WWDC), where the company is expected to make some major announcements. There have been plenty of leaks around the WWDC keynote address and new App Store placeholder listings seem to have spilled the beans for the company.

A placeholder for the Files app has gone live on the App Store, and is believed to be a new application for iOS 11 that's due to debut at WWDC. The new leaked app could be a file-management app for iOS 11 users. Another placeholder has been spotted for Activity app which again believed to be an iOS 11 app. Notably, the placeholder listings have no description of apps.

The leaked Files and Activity apps were first spotted by developer Steve Stroughton Smith who also points out that the new app only supports 64-bit SoCs. Apple has been rumoured to drop support for 32-bit apps for months, and the new leak corroborates the fact. For those unaware, Apple introduced support for 64-bit apps back in 2013 with the launch of the iPhone 5s. The company made it a mandate for all new apps released post February 2016 to be built on the 64-bit framework. There have been previous reports that have pointed that Apple was steadily weighing down on 32-bit apps ever since it introduced support for 64-bit apps in iOS 7 in 2013.

What to Expect From Apple's WWDC Keynote Address Today

Unfortunately, there are not many details about the Files and Activity apps available as of now but we can expect to hear more from Apple in the keynote address which begins at 10AM PDT (10:30pm IST). The Files app probably won't give users access to the file system, as Apple has long been against this - it could be a new name for the Finder app.

Apple is rumoured to introduce a new Siri Smart Speaker, new iPads, and also expected to upgrade the MacBook line-up. The Cupertino-based company is also widely to debut the iOS 11, macOS 10.13, watchOS 4, and tvOS 11. The 28th annual Worldwide Developers Conference is returning to McEnery Convention Center in San Jose, which will host the event after 15 years.