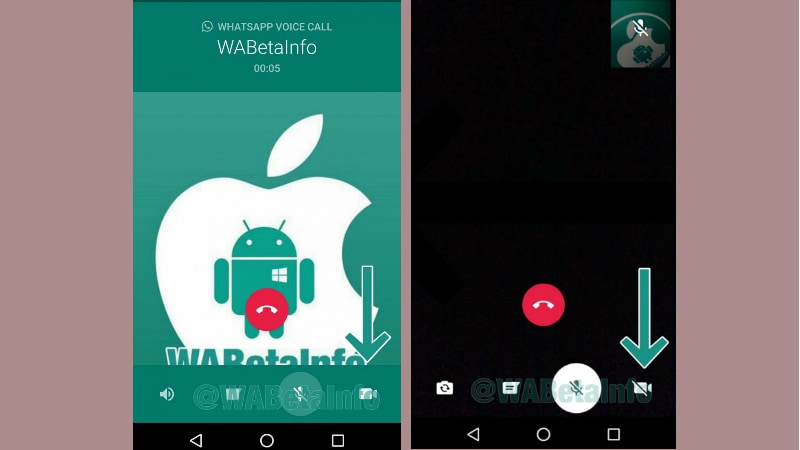 WhatsApp has had a busy year, and has rolled out quite a few new features for its users, streamlining the interface and improving content sharing. Now, the company is testing a new feature (disabled by default) that will allow users to switch between voice calls to video calls seamlessly. Also, the company has been reported to start generating revenue this year through a business service, and now more details on that front have surfaced. The most interesting bit the report claims is that WhatsApp is working on a second app mainly for business owners.

First up, WABetaInfo reports that WhatsApp is now testing a new feature on Android that will let you switch from voice calls to video calls, and vice versa, without disconnecting. For now, you have to end a voice call and make a video call again, to switch formats, but this new feature looks to remove that hassle, and it has been spotted in Android beta version 2.17.263 that rolled out last week.

In the new VoIP UI, the tipster noticed a new video call button at the bottom of the screen when on a voice call. If a user wants to switch to video, then just hitting the video button to activate the camera and speak on video call will be the new way moving forward. Once you request to switch to video call from voice call, the recipient at the other end will be able to reject or accept as he wishes. The tipster notes this feature is disabled by default and can be expected to be enabled for WhatsApp users in future updates.

The tipster also sheds some light on the business strategies to generate revenue, and the measures the company will take initially. Apparently, WhatsApp is working on a second application for small and medium business that will be available for Android, iOS, and Windows Phone platforms, reports WABetaInfo. Businesses will have to use the second app to communicate with their customers; however users will be able to communicate with businesses through the main app only. This business communication feature can be disabled as well, if the user wishes to.

In the business app, companies will get verified by WhatsApp for authenticity, just like how it happens on Facebook or Twitter. This will allow the user to know which communication to trust, and which to ignore. While creating a business account, the company will not be able to change the business name in the future, but the profile pic can be changed. WhatsApp will also have a PSA account of its own, where it will tell all its customers and clients about important changes and announcements.

Essentially, the tipster suggests that this new platform will be useful for companies who wish to target their clients more effectively. For example, banks will be able to communicate with users about potentially fraudulent transactions, and an airline will be able to notify their clients about delayed flights. WhatsApp is also working with few companies to let users receive information about their rides, in particular about carpooling.

This feature hasn’t been announced yet by WhatsApp, and there’s now word on when it will be launched. WhatsApp is reportedly also searching for a professional to help its monetisation efforts as the company looks to become profitable. WhatsApp has been mulling over how to use payments technologies to monetise its user base; in fact, the app is expected to receive UPI support by the end of the year.