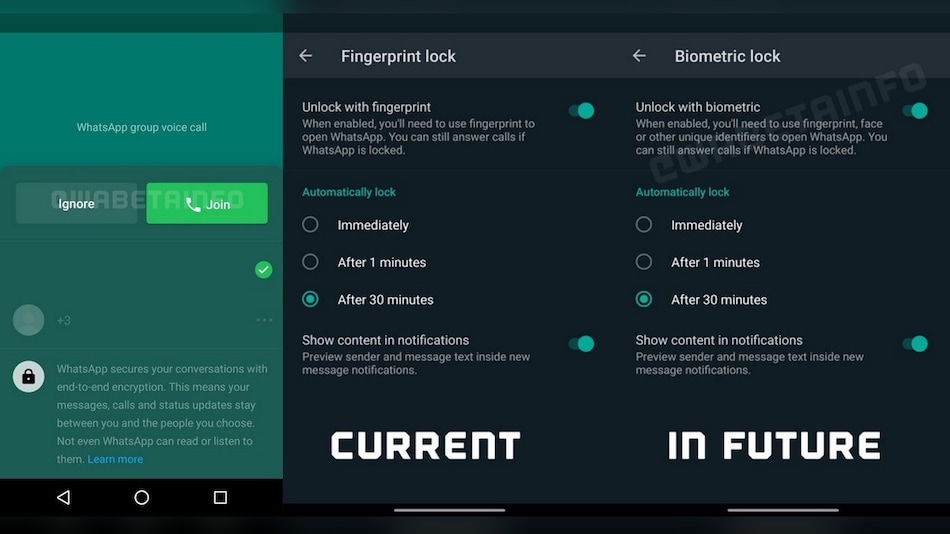 WhatsApp is testing ‘Join Missed Calls' and ‘Biometric lock' features as they have been reportedly spotted in beta version 2.20.203.3 update. The ‘Join Missed Calls' feature will allow users to join an ongoing call mid-way if they failed to answer the phone initially. The ‘Biometric lock' feature is being improved to include more ways of authentication besides fingerprint. These two features are said to be in development and will make their way to the app in a future update.

As per a report by WABetaInfo, a publication that tracks WhatsApp features but is not officially affiliated with the messaging service, WhatsApp is testing two new features as seen in the latest beta update version 2.20.203.3. One of the features – Join Missed Calls – is meant to allow users to join a group call mid-way if they happen to miss it initially. Of course, the call must still be going on and this feature will let users quickly jump in. As per the screenshot shared by WABetaInfo, the user will see an ‘Ignore' and a ‘Join' option.

Coming to ‘Biometric lock', WhatsApp is reportedly adding other ways to authenticate a user besides fingerprint scanning. As of now, only ‘Fingerprint lock' is available in the Privacy settings of WhatsApp, but it looks like this option will change to ‘Biometric lock' as it will include authentication with face unlock or other unique identifiers, along with fingerprint. Users will still have the ability to choose how soon WhatsApp will automatically lock.

As of now, it is unclear when these new features will make their way to the stable version of the app. It should be noted that they are in development and not yet available for users of the beta build. WABetaInfo has shared a preview of the currently disabled features, which are expected to show up in a future build.

Recently, a beta update with version 2.2043.7 was said to include support for voice and video calls for the web/ desktop client of the messaging app. While this feature is already available on the Android and iOS apps, WhatsApp web does not support it yet. And just like the Join Missed Calls and Biometric lock feature, it is unclear when it will make its way to the public.