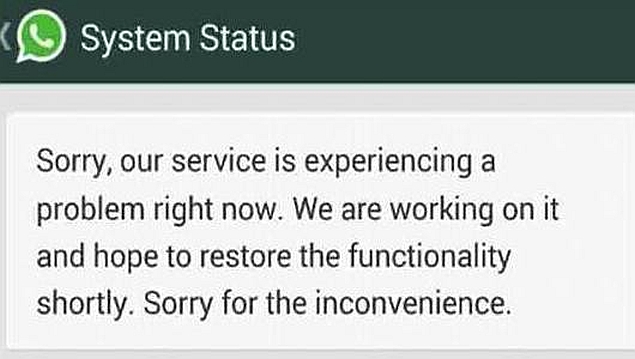 After boasting of handling a record 64 billion messages in a single day, WhatsApp on Wednesday suffered from a service outage.

The popular cross-platform instant messaging service's Wednesday outage was its second major outage since it announced its acquisition by Facebook for $19 billion. The outage happened shortly after it tweeted about how it made a new daily record of handling about 20 billion outgoing messages and nearly 44 billion incoming messages in a single day - adding up to 64 billion.

According to a report, the service was experiencing issues for roughly an hour in some part of the world before it got resolved. A site that monitors web companies' outages also reported that WhatsApp has been having issues since 8:34 AM ET on Wednesday, the report added.

The outage had an effect in India too, as many users tweeted that they were unable to send messages on WhatsApp.

Although WhatsApp didn't acknowledge the issue via its official Twitter account this time around, unlike the previous outage in February which reportedly lasted for about 210 minutes.

"Sorry we are currently experiencing server issues. We hope to be back up and recovered shortly," was what WhatsApp had tweeted in the February outage.

The company later blamed a network router for 'biggest' outage with an apology.

"We are sorry about the downtime," wrote Koum. "It has been our longest and biggest outage in years. It was caused by a network router fault which cascaded into our servers."

Five-year-old WhatsApp claims to have about 450 million users globally, out of which 330 million use the app every day.