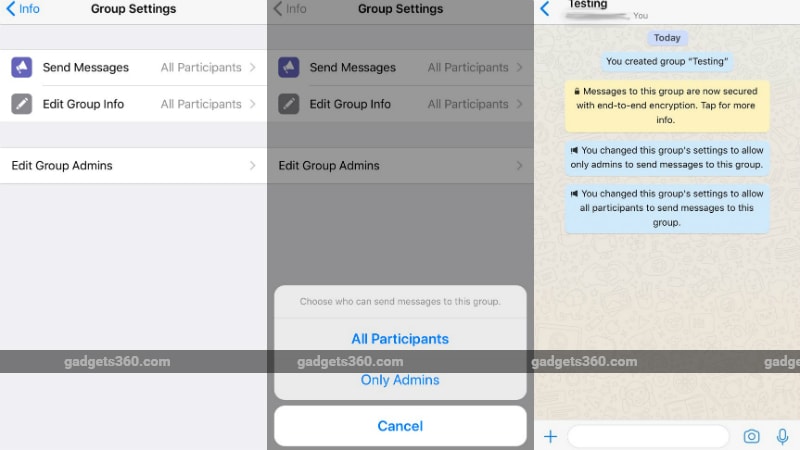 WhatsApp is getting a new feature that enhances the control of group admins on the platform. Rolling out on WhatsApp beta version 2.18.201 for Android and stable version 2.18.70 on iPhone, the new capabilities now allow admins of WhatsApp groups to control the ability of participants to send messages in the particular group. Available under the Group Settings menu is a new option called Send Messages that can be toggled for admins or all participants. Gadgets 360 has spotted the feature on both the above-mentioned WhatsApp for Android (beta) and iPhone versions. The feature will reportedly roll out soon for users of stable Android version 2.18.191 soon, as well as for Windows Phone.

The new Send Messages option will now accompany the Edit Group Info that was available under Group Settings with the same two settings - All Participants and Only Admins. The feature will be accessible even if the group has just one admin. Additionally, all participants in the group will be notified about the developments through broadcast text messages.

This update comes in the wake of WhatsApp pushing for business account adoption on its platform in India. Numerous groups on the platform are concerned with the sale and purchase of products, and restricting users to send unnecessary messages can help remove clutter on the popular messaging app. As per a report by WABetaInfo, the feature is rolling out on stable versions for Android, iPhone, and Windows Phone. Additionally, rollout on iOS is said to be substantially faster than on the other two mobile platforms.

Group admin controls on WhatsApp were first announced back in May when the platform rolled out the ability to admins to control who can edit the group's description and icon and remove admin permissions. With the update, WhatsApp also ensured group creators could no longer be removed from the group by other admins.