WhatsApp is reportedly offering cashback to a specific amount of beta users. 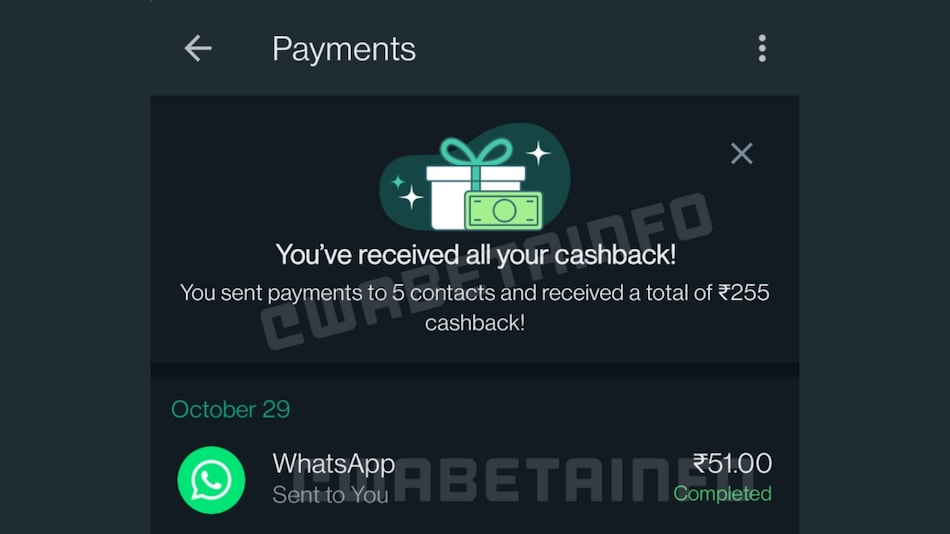 WhatsApp may have introduced cashback as a limited promotional offer

WhatsApp is rolling out a cashback feature for users who often use Payments. This feature, as the name suggests, offers cashback to users on UPI transactions via WhatsApp Payments. This feature is said to be rolling out to Android and iOS beta users both. Tracker WABetaInfo reports that the cashback feature may be rolling out to specific beta testers only, and not all users who use payments will be receiving cashback. There is no clarity on when this feature be broadly rolled out for all users on WhatsApp.

WABetaInfo reports the arrival of cashback on WhatsApp Payments. It was spotted by an Indian follower Vipin who received a certain amount of cashback after sending payments to five contacts. A cashback of Rs. 51 is given for each transaction, totaling to Rs. 255 worth of cashbacks across all five. The screenshot shows a notification from WhatsApp that has congratulated the user for receiving cashback. The tracker notes that this may be a limited promotion to encourage more users to try WhatsApp Payments and claims that it may end in the future. Once the cashback is received, WABetaInfo says that the details about the transaction are available on the History page within WhatsApp Payments Settings.

It is also being reported that this amount of cashback - Rs. 51 - stays the same, as long as each transaction is worth Re. 1 or above. We've reached out to WhatsApp for details about the cashback terms and conditions, as well as a comment on plans to rollout of cashbacks to all users. To encourage more users to try out WhatsApp Payments, WhatsApp recently introduced a range of stickers in payments. The instant messaging app collaborated with five Indian women artists to offer a new pack of Payments stickers for its users in India. These stickers are essentially built on various cultural expressions related to money exchange.