WhatsApp for Jio Phone will receive support for the Status feature. Jio Phone runs on the KaiOS platform. 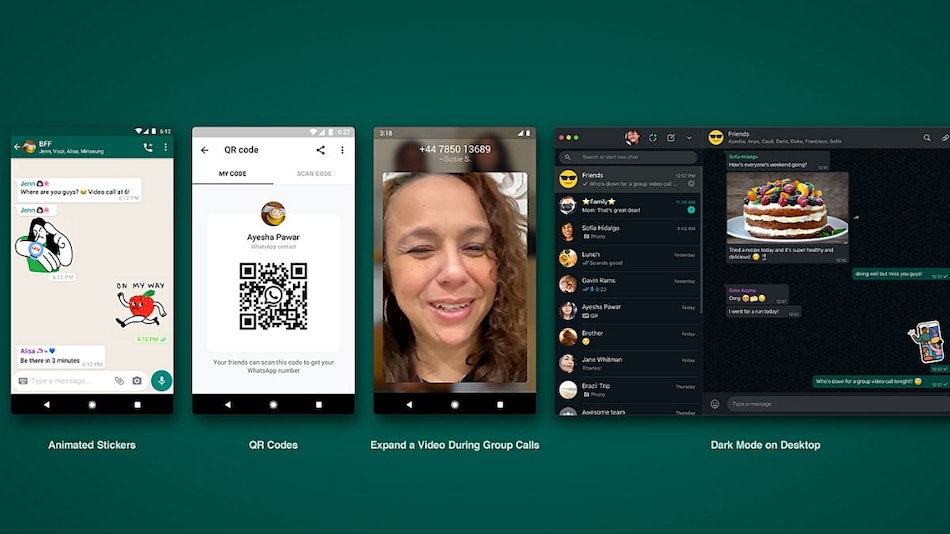 WhatsApp users will soon be able to communicate with animated stickers

WhatsApp on Tuesday announced a number of new features that will be making their way to the Android, iPhone, KaiOS, and Web versions of the chat app. WhatsApp for Android and iPhone will get features such as animated stickers and QR codes along with an improved group video calling functionality over the coming weeks. The Facebook-owned chat app has also said WhatsApp for Jio Phone will get Status support. Additionally, WhatsApp for Web is finally receiving Dark Mode.

WhatsApp users will soon be able to communicate with animated stickers. The development comes days after a report suggested the testing of this feature on the platform. The chat app will also introduce QR Codes for users to seamlessly add new contacts.

"Soon when you meet someone new, you will be able to scan their QR code to add them to your contacts. No more tapping in their digits one at a time," the company said in a statement.

Additionally, users will be able to enlarge a participant's video to full screen during a group video call. WhatsApp in April increased the group call limit to eight participants.

Notably, KaiOS users will soon be able to update WhatsApp status. This means that Jio phone users and other KaiOS users in India will be able to share updates via WhatsApp Status that is limited for only 24 hours.

Dark mode is making its way to WhatsApp Web and WhatsApp desktop app. The Dark mode arrived on mobile apps back in March this year.

As mentioned, the new features will reach users "over the next few weeks", with the latest versions of WhatsApp.