WhatsApp will now also show all ongoing group calls in your chat list. 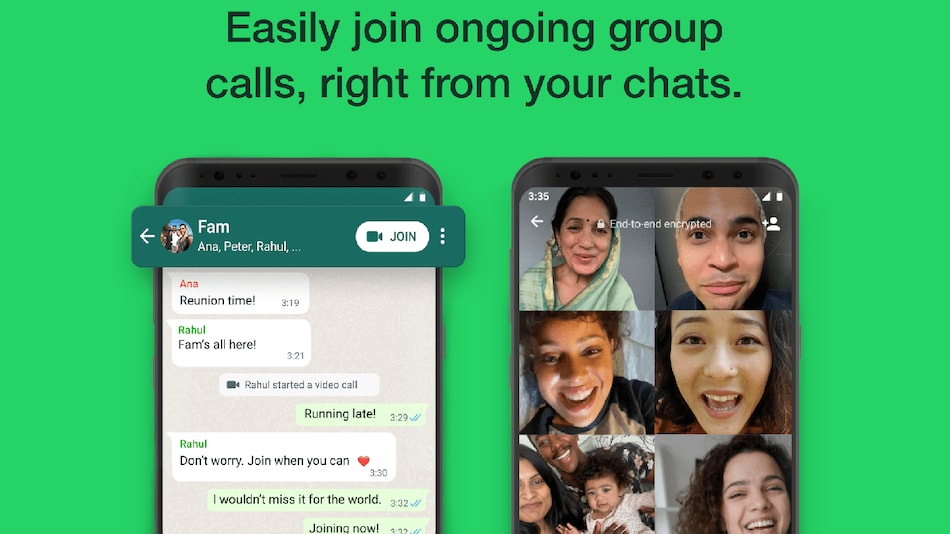 WhatsApp has integrated its joinable calls feature — which lets users join an ongoing group video — directly into group chats. The latest update will give users the option to join an ongoing group call right from the group chat tab. Joinable calls were first introduced on WhatsApp in July this year. The instant messaging app has now brought several improvements to the feature by integrating it with WhatsApp groups. Among the changes introduced with the latest update, group call notifications will now display the name of the group instead of the names of the participants.

There are a few changes introduced to WhatsApp's joinable calls feature. A user can now join an ongoing WhatsApp group call right from the group chat window. All ongoing group video and voice calls will now also be visible in your chats that you can easily spot and join as soon as you open the app.

"We are making it easier to connect spontaneously with your groups. Join ongoing calls with your groups anytime, effortlessly, and directly from the chat view with one click," the Facebook-owned company said.

Once a group call is started, all members can either join in immediately or at their leisure. The latter will see a separate tab within the group chat with a Join button, they can tap it to get into the call. WhatsApp says that the call notification will say the name of the group instead of the participants' names. It should be noted that only people who are part of the respective WhatsApp group can join an ongoing group call. WhatsApp says the calls will now also receive a lighter distinct ringtone to make it feel as “light as sending and receiving a message”.

WhatsApp has been adding new features over the past week to attract new users and ensure privacy for the existing ones on the platform. It recently started rolling out end-to-end encryption for backups stored on Google Drive and iCloud for Android and iOS users, respectively. The messaging platform is also reportedly upgrading its existing voice messages function with a global voice message player. The move would allow users to listen to voice messages when they look at recent chats. The update is said to be in development for beta testers at present. Separately, WhatsApp is reported to update its ‘Disappearing Messages' feature that will give users the option to choose between 24 hours, seven days, and 90 days after which the messages will disappear.