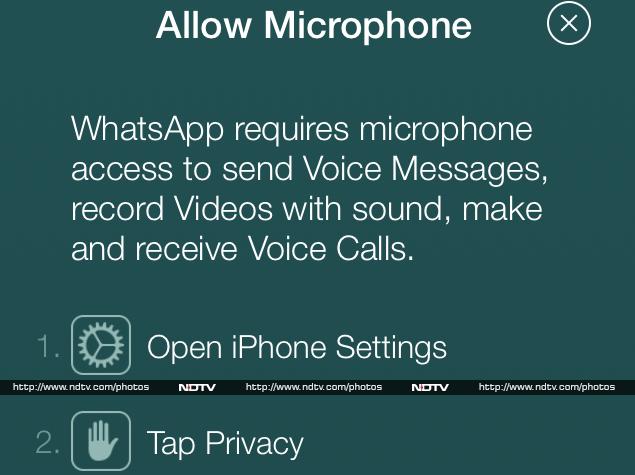 Voice calling, the one big feature missing from WhatsApp's arsenal, is coming to the popular platform soon. We've been hearing about this feature since February, when WhatsApp CEO Jan Kuom announced that the voice calling feature would be added to Android and iPhone first, followed by BlackBerry, Nokia and Microsoft platforms. Now, NDTV Gadgets has spotted a mention of the feature in WhatsApp's iPhone app, which all but confirms that the feature is indeed nearing launch.

(Also see: How to Stop Auto Downloading and Saving of Photos)

With the latest WhatsApp update that was released for iPhone on September 8, WhatsApp added several features such as improved location sharing and fast camera access. What the app's release notes do not mention is that it has added a pop-up, which requests access to the microphone every time the app is opened. As you can see in the screenshots above, this pop-up reads, "WhatsApp requires microphone access to send Voice Messages, record Videos with sound, make and receive Voice Calls."

(Also see: How to Backup Your WhatsApp Messages)

This pop-up will appear only if users have not allowed WhatsApp access to the microphone. To see this, go to Settings > Privacy > Microphone > WhatsApp > flip the slider to Off. Now open WhatsApp to find mention of the voice calling feature.

Previously, WhatsApp's voice calling feature was seen in Hindi translation requests and later in leaked images of the user interface for voice calling. However, this is the first time that mention of this feature has been spotted in the app itself.

With over 600 million active users, WhatsApp is the world's most popular messaging app. It was acquired by Facebook earlier this year, in a deal reportedly worth $19 billion.
Comments