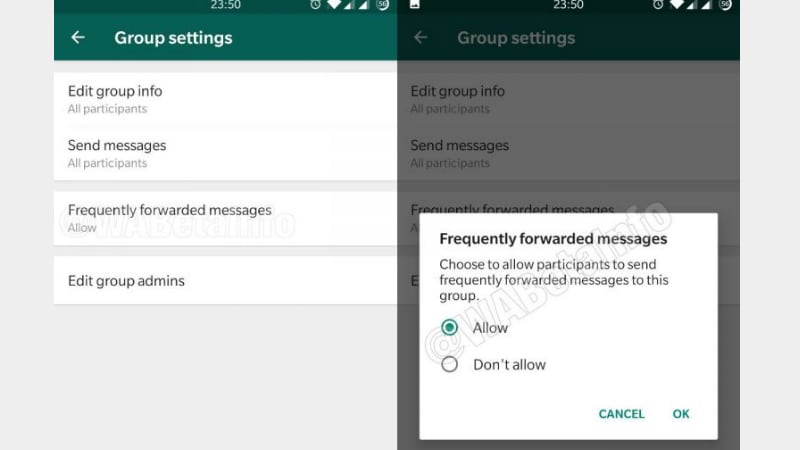 WhatsApp is working on bringing the ability to block ‘Frequently Forwarded' messages in group chats, and this was spotted under development in the latest Android beta update. In a bid to curb fake news, admins will be able to block ‘Frequently Forwarded' messages. The audio picker feature that was spotted in an earlier beta has now rolled out, WABetaInfo reports

The instant messaging app is also working on iPad support, also spotted in latest iOS beta. WhatsApp's iPad support will bring new features like split-screen and landscape mode, and will retain all of the iPhone app features like Touch ID support.

Starting with Android beta, WhatsApp just released beta v2.19.97 and tracker WABetaInfo has spotted the company working to bring the ability to stop users from sending ‘Frequently Forwarded' messages to group chats. The feature is under development, so users won't be able to see it yet as its ‘disabled by default'. It should be available sometime in the future in ‘Group Settings' and only administrators will be able to see and edit it. Essentially, WhatsApp looks to curb fake news spreading with this feature, and if the admin feels that too many fake links are shared on a particular group, he/she can switch this feature on, and users of that group will not be able to send messages that are labelled as ‘Frequently Forwarded'.

If a message is forwarded more than four times, a message is marked as ‘Frequently Forwarded' by WhatsApp. If the admin feels that all users in the group forward only real news, they can choose to keep it disabled. WhatsApp is currently testing the feature in this Android version. No tracks have been found in the iOS app. There's no word on when it will be made available for everyone.

WABetaInfo also notes that the audio picker feature spotted in development in January is now available in the v2.19.89 beta. It brings along a new UI for selecting audio files, allows users to preview (both audio and album art) an audio file before sending, and also lets users send up to 30 audio files at a time. The beta tracker site says the feature has rolled out completely, and we were able to spot it both on the v2.19.89 beta and the v2.19.97 beta versions.

WhatsApp's latest iOS beta v2.19.4 was also released, and tracker WABetaInfo spotted iPad support under development. Again, this means that the app is not available for iPad users on the App Store yet, but it should arrive soon. WhatsApp should presumably first release it in beta on TestFlight, and then make it available commercially. The tracker has shared screenshots showing the new iPad UI, the redesigned chat screen with new split view support, and landscape mode compatibility. The screenshots suggest that Status screen doesn't support split view yet.

The tracker notes that the iPad app has all the similar features as the iPhone app, along with Touch ID support and the only difference is that the Camera tab is just available in the iPhone app, and wasn't spotted on the iPad app. WhatsApp may add it before releasing it for beta users. There's no word on when this app support will be available commercially.

PUBG Mobile Prime and Prime Plus Subscriptions: Are They Worth It?
Samsung Users in India Can Now Check Prices of Their Phone’s Spare Parts Online