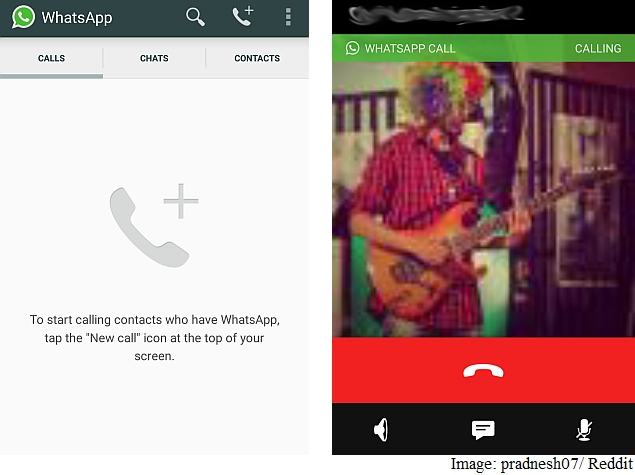 A Reddit user on Friday posted screenshots of the voice calling feature, supposedly accessible in the latest WhatsApp app (v2.11.508) for Android from the company site on a Google Nexus 5 running Android 5.0.1 Lollipop in India.

Reddit user pradnesh07 claims (via GSMArena) users who are running the aforementioned combination of WhatsApp app version, Android OS version, and device make will not be able to activate the voice calling feature until they receive a call from someone else with the feature already activated - hinting at a slow, almost invite-based rollout.

The user further notes those who activate the WhatsApp voice calling feature in this manner - of receiving a call from someone with the feature already enabled - may not be able to use the feature to place further calls themselves.

To be noted before proceeding with a description of the UI seen in the screenshots, is that WhatsApp has yet to make any announcements about the rollout of voice calling to users, and that if reports are correct, the feature still appears to be in testing due to the very limited nature of the rollout. User pradnesh07 also claims to have been able to activate the feature only after receiving a WhatsApp call.

The screenshots show WhatsApp now features a new Calls tab on top, alongside Chats and Contacts, where users can start a call with one of their WhatsApp contacts via the 'New call' button on top, similar to the already-present 'New chat' button. Some users report that at this point, they are shown a list of apps including the Google dialler with which they can place the call, but no WhatsApp calling option.

Reddit user pradnesh07 soon after also uploaded a video of the feature in action.

Those with the feature fully working will supposedly see a standard calling interface, with the disconnect button above buttons for speaker, messages, and mute. Beyond call history visible on the Calls tab (not shown here as contact details were insufficiently blurred), no further screenshots were shared, of an in-call interface for example.

The WhatsApp voice-calling UI seen in the screenshots is mostly in-line with earlier screenshots from December that were supposedly found by digging around within the WhatsApp app for Android, but not yet functional.

Until a wider rollout of the feature, or WhatsApp's own announcements, we'd still recommend taking the reports with a pinch of salt. While the free voice calling feature has been promised for Q1 2015, and already has telecom operators pre-emptively looking to regulate with tariff measures, it's possible it may actually roll out globally in a slightly different form.

Uber Probed by US Judge on Driver Benefits
Just Whose Internet Is It? New US FCC Rules May Answer That