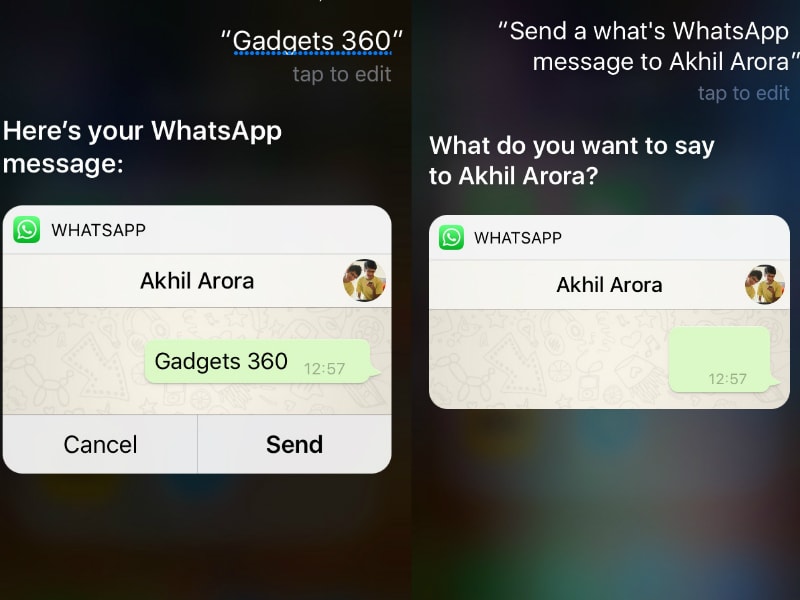 WhatsApp for iPhone has just received an update bringing a host of new features in sync with the new iOS 10 update. It also brings a few nifty features to improve in-app sharing, but mostly takes advantage of Siri's integration with third parties in iOS 10.

WhatsApp v2.16.10 for iPhone arrives just hours after Apple released iOS 10 to eligible devices. It lets you now place WhatsApp calls and even send text messages through Siri. For this to work, you will have to grant access to Siri first. Siri should prompt you for access, but in case it doesn't head to Settings > Siri > App Support > WhatsApp. Switch the toggle on, and you should be able to use Siri to perform the above-mentioned WhatsApp functions.

These new features are possible because of Apple's decision to open up Siri to third-party apps. WhatsApp is one the first to roll out these Siri-centric features on its iPhone app. Another iOS 10 exclusive feature is the ability to place a Widget on the lock screen and home screen, which lets you easily see recent chats and unread messages. The update also lets you pick up WhatsApp calls from the lock screen just like normal calls. Earlier, iPhone users had to swipe right, unlock the phone, and then pick up the call after the WhatsApp app was opened on screen.

Apart from this, WhatsApp for iPhone also gets a nifty feature that makes in-app forwarding and sharing more easy. When you receive a photo or video on WhatsApp, and want to forward or share it with friends, there is now an arrow button right beside the photo/video enabling you to do it faster. The quick forward button lets you share photos and videos in multiple chats. By clicking the button, WhatsApp will show you frequently contacted chats on top and other recently contacted users and group chats below. You can then select multiple chat heads to forward and share in one shot.

(Also see: WhatsApp for Android Beta Gets a Flash for Better Selfies)

Furthermore, WhatsApp for iPhone also introduced a new feature that allows the camera to switch from front to rear and vice versa just by double tapping on the screen. WhatsApp recently introduced a voicemail feature to iPhone and Android enabling users to leave a voice message if a WhatsApp call is not answered. Earlier, the iPhone app also received bigger emojis, the ability to delete/ mark as read/ archive multiple chats at once, share and forward multiple chats, and the option to zoom in while recording a video. Future plans of WhatsApp include video calling, and introducing gif support.