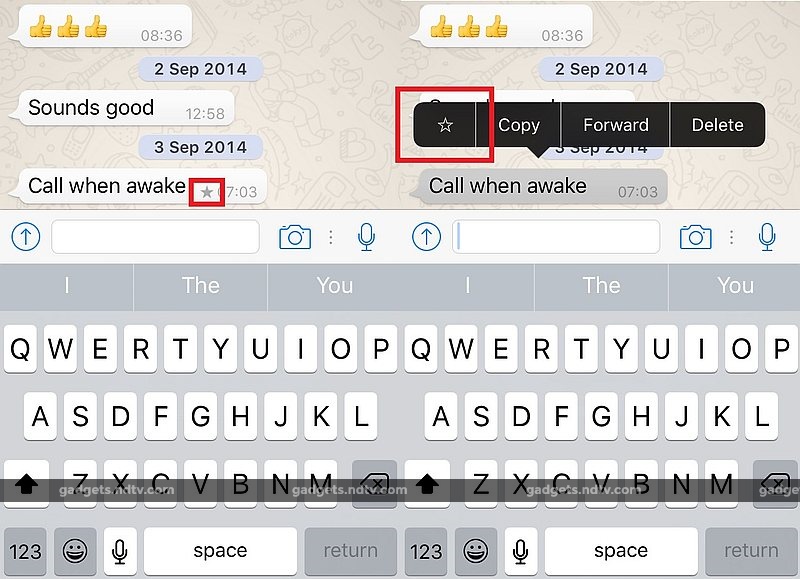 WhatsApp, the popular Facebook-owned messaging service, has started rolling out a new 'Starred Messages' feature for iOS users in the form of an app update. The feature aims to let users quickly access bookmarked messages including images, videos, or other content quickly.

WhatsApp users would now be able to 'Star' a message using tap and hold gesture. The message would then be saved in a separate new 'Starred Messages' tab. The feature is also available for WhatsApp Groups.

Starred Messages has been seeded to iOS users in the app version 2.12.7 and is likely to reach Android and Windows Phone soon. The updated app is available to download form the App Store.

iOS users in August also got access to WhatsApp for Web. The feature was released in January this year for Android, Windows Phone and BlackBerry users. To use the feature, one can simply head over to the WhatsApp Web website and scan a QR code on the desktop screen via the WhatsApp app on your mobile. Notably, WhatsApp Web uses your phone's Internet connection to send and receive your messages, so your mobile needs to be connected to the Internet throughout.

Here's Why You Can Buy FIFA 16 and Other EA Games Only From Amazon India
Honor 7 With 5.2-Inch Display, Fingerprint Sensor Launched at Rs. 22,999