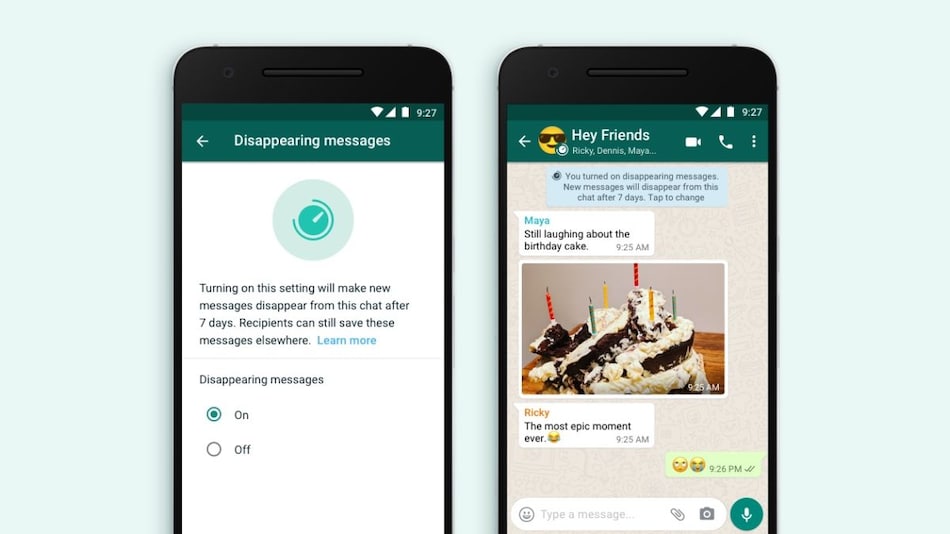 WhatsApp has officially announced that it will be introducing a new ‘Disappearing Messages' feature through an update that rolls out globally this month. The details of the new feature, however, have been out since earlier this week after an FAQ page created by WhatsApp was noticed. The long-anticipated ephemeral messaging feature pioneered by Snapchat was first spotted last month through a WhatsApp beta version. It will allow users to enable an option on individual and group chats that deletes new messages after seven days.

'Disappearing Messages' has started rolling out from today, and will be available across Android, iOS, and Linux-based KaiOS devices, along with WhatsApp Web and Desktop platforms, by the end of this month. WhatsApp had earlier this week detailed how to enable/ disable the new ‘Disappearing Messages' feature on different devices and published FAQs on its usage on a support page.

The ‘Disappearing Messages' feature on WhatsApp is also different from how it works on Telegram. While Telegram lets users decide the duration before the messages disappear in a chat, messages sent to a chat on WhatsApp will disappear after seven days. Snapchat, on the other hand, deletes Snaps after they've been opened, deletes unopened Snaps sent to a group chat in 24 hours, and all other unopened Snaps in 30 days.

WhatsApp says that it's starting with seven days because it seems like an appropriate window for its users to finish a particular conversation while giving them the peace of mind that the conversations aren't permanent. "We're starting with 7 days because we think it offers peace of mind that conversations aren't permanent while remaining practical so you don't forget what you were chatting about. The shopping list or store address you received a few days ago will be there while you need it, and then disappear after you don't," the company said in a statement.

The 'Disappearing Messages' feature has to be enabled separately for each chat window — individual or group conversations — and can be accessed by clicking the name of the individual contact or the group on WhatsApp. When enabled, the new messages sent by a user will disappear for the selected contacts after seven days. However, the preview of disappearing messages might display in notifications until WhatsApp is opened on the receiving devices. Disappearing messages that are forwarded to a new chat window, which has the option turned off, won't be removed either. And when a user replies to a disappearing message, the quoted text might also remain in the chat after seven days.

Users receiving the messages can also still copy the text and take screenshots of the messages within seven days. Disappearing messages will also land in user backups but will be deleted after the user restores messages from it. Given that there are many ways to retain chats shared through disappearing messages, it seems more like an option to clear up conversations than a feature to share information that deletes automatically.

Apart from Snapchat, Telegram, and now WhatsApp, other messaging apps to have similar functionality include Signal and also Facebook Messenger that now has a vanish mode.