WhatsApp Testing 'Delete for Everyone' Feature on Android and iOS, Launch Imminent: Report 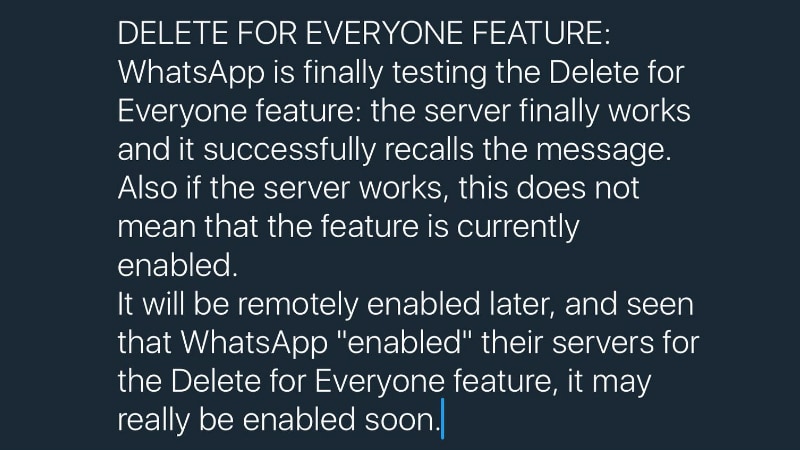 We've heard about the WhatsApp recall feature on several occasions in the past this year, but most of its traces were found in the internal code, and no real evidence was there of its arrival, up until now. According to a fresh leak, the Facebook-owned chat app has finally started testing the 'delete for everyone' feature in its Android and iOS apps, and it essentially lets you delete a sent message before the receiver has read it.

According to WhatsApp serial tipster WABetaInfo, the dedicated recall server is working and is successfully recalling messages. The feature is still being tested, and will be remotely activated for everyone later. However, the tipster claims that the 'delete for everyone' feature will be enabled really soon. The tipster also notes that the feature will also delete messages from the notification centre as well - both on Android and iOS devices.

This recall feature is already available in other chat apps like Telegram, Viber, and other competitors, and WhatsApp is finally looking to make it available to its billion daily active users as well. These apps allow you to recall or revoke a message that has yet to be seen by the recipient - something that would be displayed as a single tick in WhatsApp. Some, allow you to delete the message on both your phone and the recipient's phone, regardless of whether the message has already been seen. An edit message feature is also often available. In its current form, WhatsApp doesn't allow users to edit, delete, or recall messages sent to the recipient.

This year, WhatsApp made huge strides by launching the new Status feature, and it recently also announced WhatsApp for Business officially. The company claims is testing the feature with a few clients, and will hopefully look to monetize in the future.

Oppo A71 With Android 7.1 Nougat Launched in India: Price, Specifications