WhatsApp Dark Mode Gets New Solid Colour Options on Android: All You Need to Know

WhatsApp dark mode is currently available only for beta version users on Android. It is yet to reach stable version users. 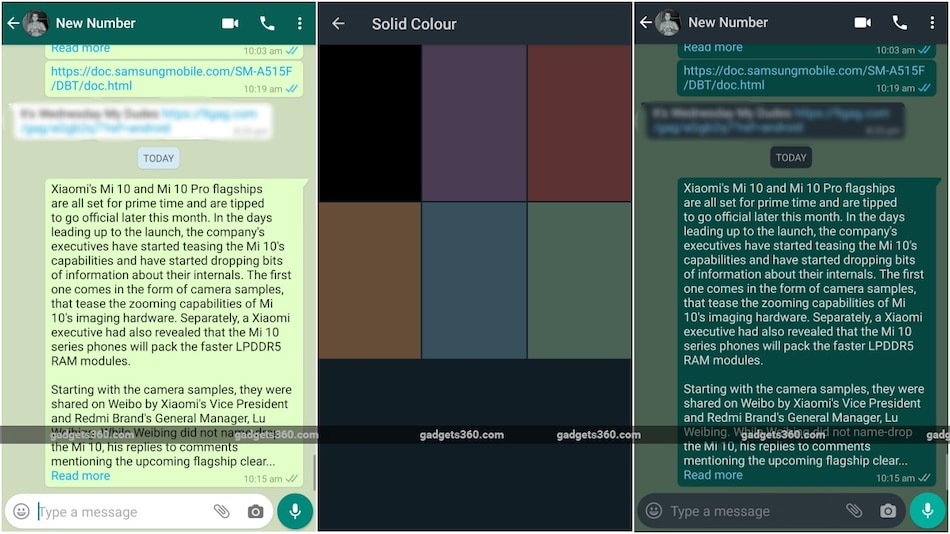 WhatsApp beta for Android is getting a new version via Google Play Beta programme. This version indicates the features that we can expect to see in the stable version over the coming weeks. One of the major changes present in the new beta version is related to WhatsApp dark mode that was introduced in beta version last month. It seems WhatsApp dark mode when it officially becomes available to the stable version users will be more detailed and feature-rich than expected.

According to WhatsApp features tracker WABetaInfo, Facebook-owned WhatApp has released the version 2.20.31 of its beta app for Android via Google Play Beta programme. This version includes new solid colour options that can be used by the WhatsApp users instead of just back while running the dark theme. As you can see in the the screenshots taken by Gadgets 360, there are six solid colour options, including black.

While the dark black theme will help conserve the battery on OLED screen phones, the other colours won't have any such impact. They may still be easier on the eyes in low-light situations, compared to a white theme.

We were able to see the new solid colour options in WhatsApp v2.20.31 for Android. You can either register for the Google Play Beta programme to try out the latest beta build, or sideload it via APK Mirror.

To recall, in the last beta version of WhatsApp Messenger for Android, the company had removed the Set By Battery Saver option to triggering dark theme on phones running Android 9 or below.

There are no other major tweaks present in the latest WhatsApp beta for Android. There is still no word on when dark theme will be released for WhatsApp beta for iPhone users or when it will reach the stable version of the chat app on both Android and iPhone.

Meanwhile, WhatsApp was revealed to have a critical vulnerability that could have allowed attackers to remotely access files from a Windows or Mac computer. The vulnerability is now fixed and was present in the desktop version of the app.