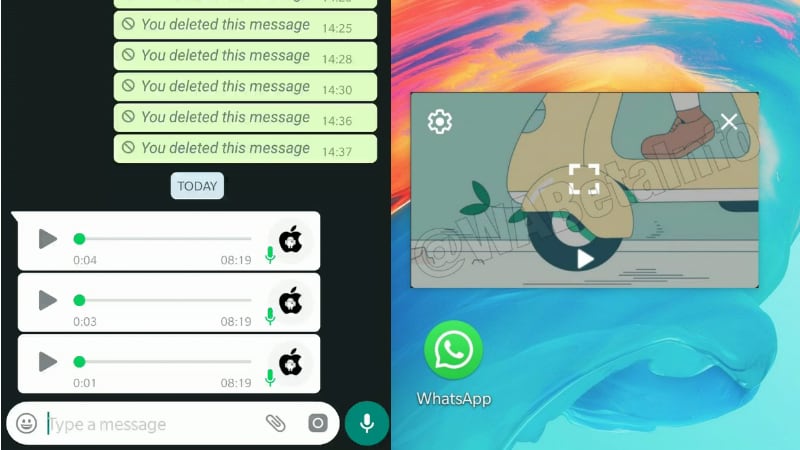 WhatsApp has again submitted a new beta update for its Android app, and it brings along a new feature called the Consecutive Voice Messages. The Android beta app has been updated to version 2.19.86, and it also suggests that WhatsApp is working to bring improvements to Picture-in-Picture (PiP) mode. The PiP improvements are disabled by default for now, but can be expected to be enabled in the next updates once it is properly developed. WhatsApp is simultaneously also working on other features like fingerprint authentication that allows users to lock the app from prying users, and the anticipated Dark Mode.

The new Android 2.19.86 version brings a new feature called Consecutive Voice Messages feature. As the name suggests, this feature allows for auto-playing of two or more voice messages sent one after the other. This feature has finally been enabled, after being a work-in-progress since November last year, and you will need to be on the above mentioned beta version to use it. To test this feature once you are on the latest version, ask a friend to send you multiple voice messages. Play the first voice message and the second one should automatically play, after the first one ends. We tested it out and it works seamlessly on latest Android beta. WABetaInfo spotted this feature first.

As per WABetaInfo, this version also suggests that Picture in Picture improvements are incoming. The PiP mode allows allows users to watch videos, hosted on YouTube, Facebook, Instagram, and Streamable in-app. WABetaInfo spotted that WhatsApp is now working on letting users switch chat without closing the PiP video bubble. Users cannot switch chat without closing the video currently, and WhatsApp is reportedly now working on fixing this limitation. Furthermore, the next version of PiP mode will also allow WhatsApp users to watch a video in PiP mode even when the app is running in the background.

The tipster notes that these PiP improvements will only be available for users on Android 8 Oreo and above. There's no timeline provided for when this new version of PiP will go live.