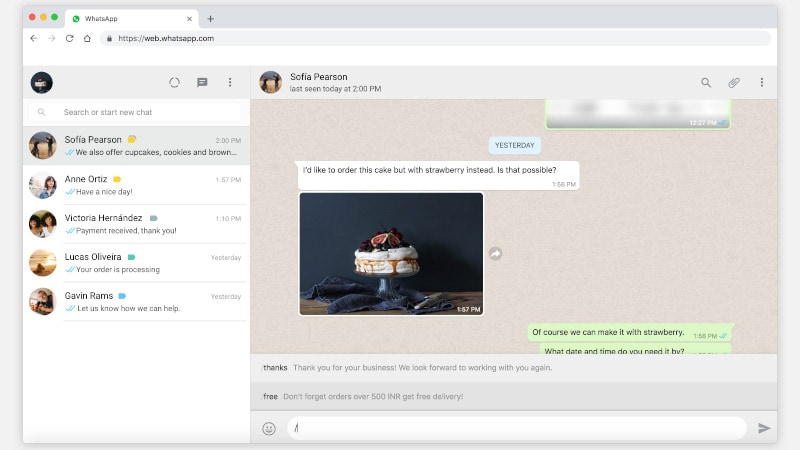 WhatsApp has announced a slew of new Web and desktop features for its business users to mark the first anniversary of the launch of WhatsApp Business app. The business app was introduced in mid-January last year. The company says the WhatsApp Business users will now be able to use quick replies, labels, and chat list filtering on the Web version as well as the desktop clients of the app. The Facebook-owned company also revealed that 5 million businesses are now actively using WhatsApp Business every month, up from three million users that the company had revealed back in April 2018.

According to the company, the quick replies, labels, and chat list filtering features have been available to WhatsApp Business users on their mobile devices, but these can now also be used on the Web version as well as WhatsApp desktop apps. Quick replies are predefined messages that can be used to answer common questions. The business users can just press ‘/' on their keyboard to select a quick reply and send it to a consumer. Labels allow the WhatsApp Business users to organise chats and contacts, so that they can be easily found later. Lastly, the chat list filtering lets users to sort their chats based on unread messages, groups, or broadcast lists.

“Using these features on a computer helps businesses save time and get back to their customers quickly. We're excited to keep growing WhatsApp Business and introducing new features that make it easy for customers to find and engage with businesses that are important to them,” the company said in a statement.

As we mentioned earlier, the company has revealed that it now has 5 million businesses actively using WhatsApp Business to communicate with their customers. The business app is separate from the regular WhatsApp that is used by over 1.5 billion users globally. WhatsApp Business competes with Apple's Business Chat and Facebook's own Messenger.

The company notes that various businesses have seen a lot of success by using WhatsApp Business, including Bengaluru-based eyewear startup Glassic. WhatsApp claims that 30 percent of new sales for Glassic are currently generated through WhatsApp Business.

To remind you, WhatsApp offers desktop clients for both Windows and macOS, whereas the Web version of the app can be accessed at web.whatsapp.com - these are of course, the consumer-facing apps and interfaces.

In Davos, US Executives Warn That China Is Winning the AI Race
EU-Japan Deal to Protect Data Exchanges Takes Effect