The features comes wih the latest Android beta version 2.19.221, and is disabled by default. 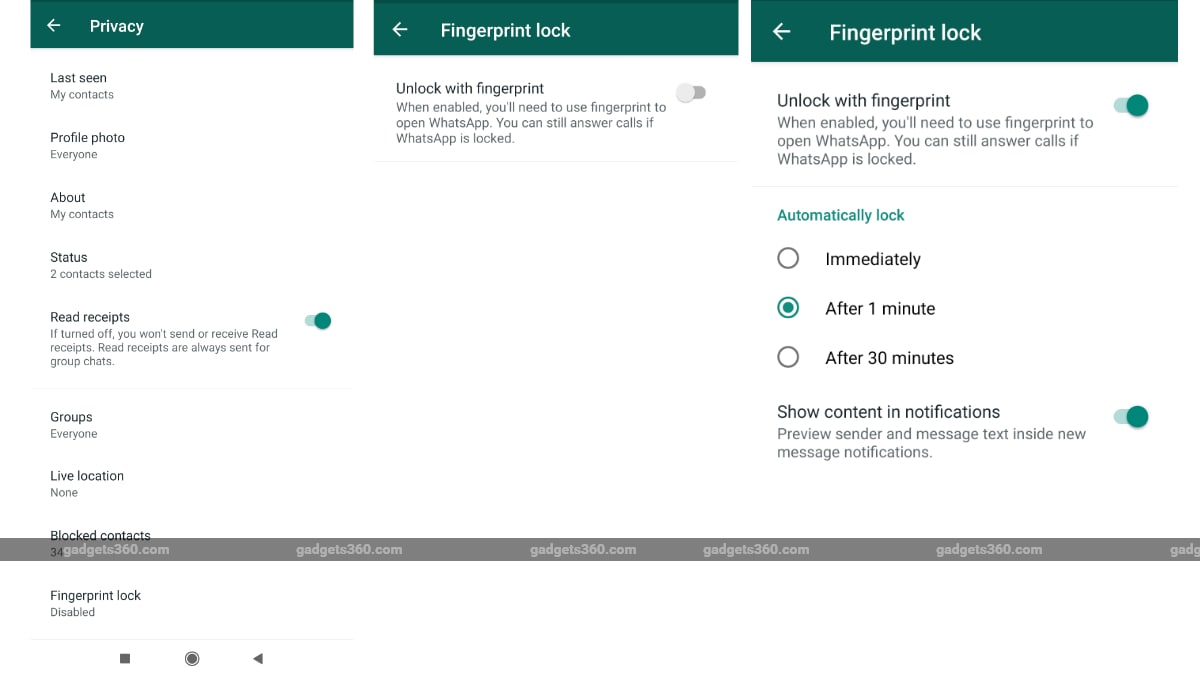 WhatsApp has finally made available to fingerprint lock feature for Android beta users, after making it available to iOS users for a while now. It comes with the latest Android beta version 2.19.221, and is disabled by default. Users will need to enable it in Settings, and this feature will allow users to add a layer of protection to their app chats, keeping lurkers at bay. There's also a new ‘show content in notifications' option added allowing users to decide if they want to show or hide message and sender preview when the fingerprint lock is enabled.

As mentioned, the fingerprint lock option is enabled in the Android beta version 2.19.221 - currently the latest version. It is disabled by default, and users will have to enable it by going to WhatsApp Settings > Account > Privacy > Fingerprint lock. If you have already updated to the latest version, and don't see the feature, try backing up chat history and reinstalling the same WhatsApp version. Notably, the feature requires the phone to be running Android Marshmallow or higher, and feature a fingerprint scanner.

When enabled, users will need to use fingerprint authentication to unlock WhatsApp and gain access. There are three options for ‘automatically lock' to choose from – immediately, after 1 minute, and after 30 minutes. Users can choose from these options according to their preference. Choosing the' immediately' option will require the user to fingerprint authenticate every time they close and open the app.

There's a 15 minute option on the iOS app, but that hasn't trickled down to the Android version, and hopefully the company will introduce it when the feature is rolled out in the stable version. In Android, there is a new option called Show content in notifications, so users can decide if they want to show or hide message and sender preview when the Fingerprint lock is enabled.

If you do not enable this option, users can still reply to messages from notifications and answer WhatsApp calls, because the authentication is only set to when you want to open WhatsApp. WhatsApp features tracker WABetaInfo says that when you enable the Fingerprint Lock feature, the widget content is hidden by default.

WABetaInfo spotted this feature first, and says, “I can say that it's safe for your privacy to enable the Fingerprint lock feature because WhatsApp, as any other app, cannot access to your fingerprint data: the authentication process is managed by the Android system: WhatsApp uses official Android APIs, so no information is sent to WhatsApp/Facebook Server.”

We can see the feature in the latest Android beta, and it should roll out to stable app users soon. If you cannot gain access to the Google Play beta programme to get the version, you could alternatively sideload the APK via APK Mirror.