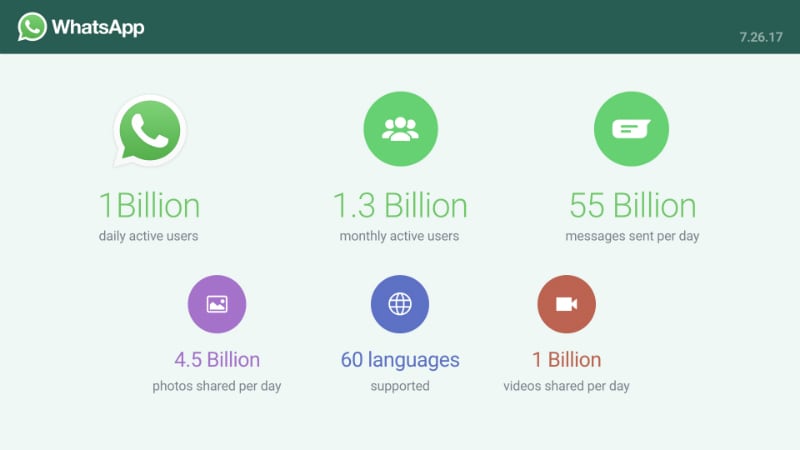 In a blog post, the Facebook-owned company announced this milestone, also stating that the monthly active user base has increased to 1.3 billion. Furthermore, almost 55 billion messages are shared every day in 60 supported languages. Videos shared per day are now at 1 billion, and photos shared per day are at 4.5 billion.

WhatsApp Status, launched earlier this year, has managed to increase its user base to 250 million every day in just a span of six months. In comparison, Snapchat enjoys 166 million daily active users on its entire app, including Stories, direct messages, and other features. Instagram Stories, another Snapchat Stories clone, has also managed to rake in 250 million users every day.

“As we celebrate this milestone, we’re committed more than ever to bringing you more useful features to enjoy, while delivering the reliability, simplicity, and security you expect with WhatsApp,” WhatsApp CEO Jan Koum said in the blog.

While Facebook stats are noteworthy, what’s really striking is the growth of WhatsApp Status in such a short time. To overcome Snapchat in such a short time is no small feat, and it shows a lapse in judgement from the Snapchat team to underestimate the huge potential that was lying outside of the world of US. Apart from WhatsApp Status, the chat service is now looking to bring business integration for monetisation. The company has been reported to make a separate app for business users as well.