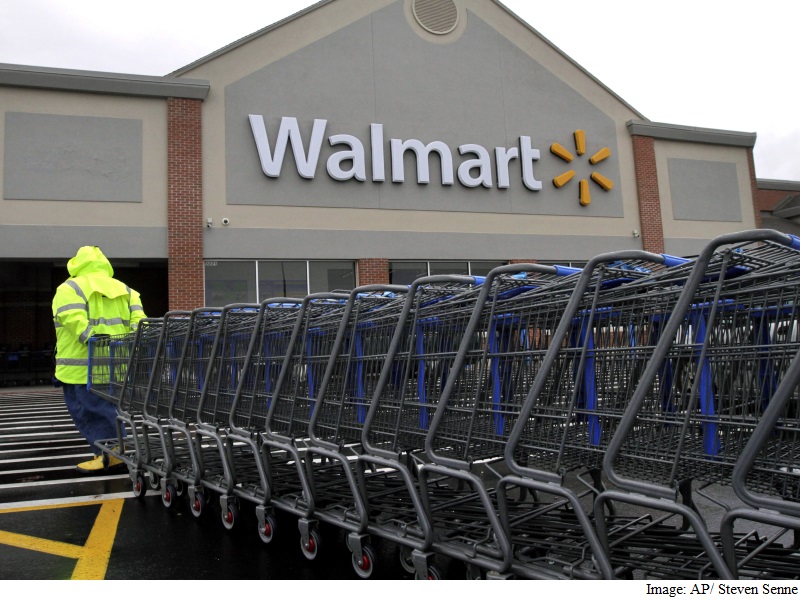 The mobile payment wars are heating up.

Wal-Mart Stores Inc., the world's largest retailer, said it's testing its own mobile payment system that will allow shoppers to pay with any major credit or debit card or its own store gift card through its app at the cash register.

It will start testing the new payment system Thursday at its stores in the Bentonville, Arkansas area, where the retailer is based. It plans to launch the payment feature in all 4,500-plus US stores in the first half of next year. While some stores like Starbucks or Dunkin' Donuts allow customers to pay with gift cards, Wal-Mart says it will become the first retailer to launch its own mobile payment system that works with an iPhone or Android device - and with a major credit or debit card.

It's part of an overall mobile strategy to making shopping easier and faster, and it's the latest feature to be added to its mobile app. But the move is the latest salvo in the battle for mobile payments that's in the early stages. Retailers, financial institutions and hardware makers are all trying to get a piece of what could be a very lucrative business.

Wal-Mart has moved into this field as Apple's one-year-old tap-and-pay system is being expanded to other merchants like Best Buy and KFC and comes several months after Google launched the Android Pay mobile wallet app and Samsung came out with Samsung Pay.

The move signals that Walmart believes it's best to build its own system to better serve its customers, even as it backs an industrywide mobile payment program that it's testing with 10 other major retailers.

"We are creating a seamless shopping experience that includes payment," Neil Ashe, president and CEO of Wal-Mart's global eCommerce, told reporters on a conference call. "It's fast. It's simple, and it's a secure way for customers to use their smartphone."

Twenty-two million customers use the Wal-Mart app each month, and more than half of Wal-Mart's online orders are now coming from a mobile device. This holiday season, Wal-Mart added new features like allowing online shoppers to check in once they got to the parking lot so they could have their online orders ready for pickup.

However, Ashe and Daniel Eckert, Wal-Mart's senior vice president of services, told reporters the system is designed to integrate with other payment applications like Apple Pay - if the retailer decides to include them. They also said they were excited about being in a pilot program called Merchant Customer Exchange that also includes such retailers as Target. The test for the system, which is called "CurrentC," is being conducted in Columbus, Ohio.

"We are listening to the needs of the customer," said Eckert. "We are looking at innovating the checkout experience and using payment to do that."

Wal-Mart's new mobile payment systems works this way: Shoppers download the Walmart app at the cash register and then choose Wal-Mart Pay. Then they activate the camera on the app to scan the QR code on the reader after the first item is scanned by the cashier. Customers can put the phone away and an e-receipt application will be sent to the app.

Mobile-payment services from Apple, Google and Samsung all rely on wireless technology called NFC. The customer merely taps the phone next to a payment machine at the store and authorizes the purchase, usually with a fingerprint ID. But it works only in stores with newer, NFC equipment. Samsung goes further in offering a backup: The phone can mimic the old-school magnetic signals produced by card swipes and work with most existing equipment.

JPMorgan Chase, meanwhile, is working on its own system for mobile payments. But Chase Pay won't use NFC when it debuts next year. Rather, it will rely on QR that can be scanned by a register.

All of these services offer security benefits: They store and transmit an alternate card number that's generated by the card issuer. The merchant never gets the real card number, so it remains safe even if the store's system gets hacked. With Wal-Mart Pay, the company says no card information is stored on the phone, but the real card number is still stored at what it says is a secure data center.

The retail consortium's CurrentC system is similar to Apple - but customers don't use a fingerprint, and it doesn't use NFC technology. Customers scan a QR code on the reader.

Apple and others have faced some challenges to change shopper behaviors who are accustomed to just taking out their wallets to pay.

When Apple launched in the US, the US had 200,000 tap-capable machines. That's expected to surpass 1.5 million this year. The growth includes about 100,000 small to medium-sized merchants each month, Apple said. Apple has said that Cinnabon will add Apple Pay to all its US locations next year, while Domino's company-owned pizza stores will get it by year's end. Apple also is conducting a pilot program with Starbucks, with a broader rollout next year, while KFC will launch next spring.