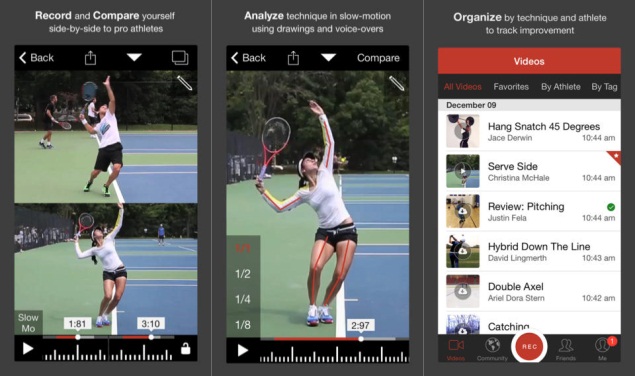 Teams striving for medals from the 2014 Winter Olympics in Sochi are turning to video analysis apps to help them fine-tune their performance and give them a competitive edge.

"We only get a handful of (practice) runs, specifically six runs of official training, which is why video analysis becomes crucial," said Scott Novack, director of high performance for the U.S. Bobsled and Skeleton Federation.

The team uses Ubersense, an app for iOS devices, to review runs in slow motion and to compare them side-by-side.

"The Sochi track has three uphill sections, and it's very long. If you lose speed uphill by hitting one of the walls, it can slow you down by hundredths of a second, and in this sport that could be the difference between getting the gold or silver medals, or not getting a medal at all," Novack said in an interview from the Sochi.

Several people stand at different curves that present challenges and use the app to record the performance. The clips are automatically synched across all devices, allowing the main coach to review them and identify where improvements can be made.

"He knows the start times and down times of every video and he can figure out where the athletes gain speed and where they lose it and then make adjustments," Novack said.

At the 2010 Winter Olympics in Vancouver, the team used a more complex configuration incorporating a Slingbox, which is a TV streaming device, to analyze the live broadcast of their performance.

"In between runs, we were reviewing the video and that helped contribute to the two Olympic medals that we were able to get in Vancouver," Novack said, referring to the team's gold for their four-man bobsled team, and the bronze for the two-woman bobsled team.

Olympic athletes and their trainers also use Coach's Eye, which is available for iOS, Android and Windows 8 devices. The program lets them review videos in slow motion, highlight areas for improvement, zoom and focus on particular areas, and add text and audio commentary.

Michel Hamelin, the coach of Canadian skier Alex Bilodeau who won a gold medal in men's moguls in Sochi, said in an email from Sochi that the app made it "easier to compare two runs with the side-by-side video comparison, and quickly make adjustments."

"Having the video review system on their iPad means coaches are able to take it out there on the hill filming wherever they are practicing or training, " said Mike Kujansuu, marketing manager for Coach's Eye at the Michigan-based company TechSmith.

Sometimes coaches will follow an athlete down the hill on skis to get the best recording angle, he added.

Mike Willard, CEO of California-based Sportstec USA, which makes video analysis software and apps, said that at the elite level the difference between gold, silver, bronze and nothing is very small.

He added that analyzing the competition to understand weaknesses is just as crucial as analyzing one's own performance.

"If it's a direct competition sport, you're not competing against the clock, you're going to look at your competition carefully," he said.

The app can be downloaded from iTunes Store.