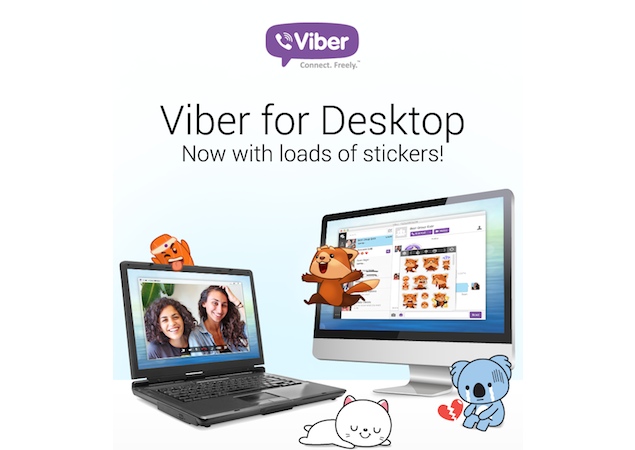 Messaging app Viber has released an update (version 4.0) for its desktop app, extending the new features and functionality that recently hit its mobile apps to the desktop client.

Viber Desktop is now also available on Linux, in addition to Windows and Mac platforms.

The update includes support for the Viber Sticker Market which allows users to buy and send their friends stickers. Other new features include support for drag and drop - allowing users to send photos by dragging them to the app; 'Seen' status, which lets users know when their messages have been viewed; the ability to receive video messages; the ability to view photo and video descriptions, and video call improvements. The platform also offers other new features, including an improved push-to-talk feature which is faster and more efficient than previous iterations of the technology, as per the company's claim.

"Viber Desktop is a critical part of our strategy to provide users with a seamless communications experience across all of their devices and platforms," said Talmon Marco, Viber CEO. "Updating Viber Desktop with the Viber Sticker Market gives our users an incredibly fun and personal way to communicate with their friends, no matter which device they're using."

Viber had recently launched the updated version (v4.0) of its platform on Android and iPhone. Viber version 4.0 is a major update to the platform as it brings two new core features, including a new Push To Talk feature for instant voice messaging, and a new Sticker Market for downloading free and paid stickers to monetise the service.

Viber had first launched desktop applications for Windows and Mac with support for video calls, in May. It allowed users who were already registered for the service on their mobile phones to sign-in on the Viber desktop client with their mobile numbers, via a verification code that's sent to the mobile app. Viber syncs the users' contacts, messages and call history with their mobile device. It also allows users to sync their instant messages across devices giving them the ability to send, receive and delete messages on either devices, and transfer voice calls between the different apps.
Comments