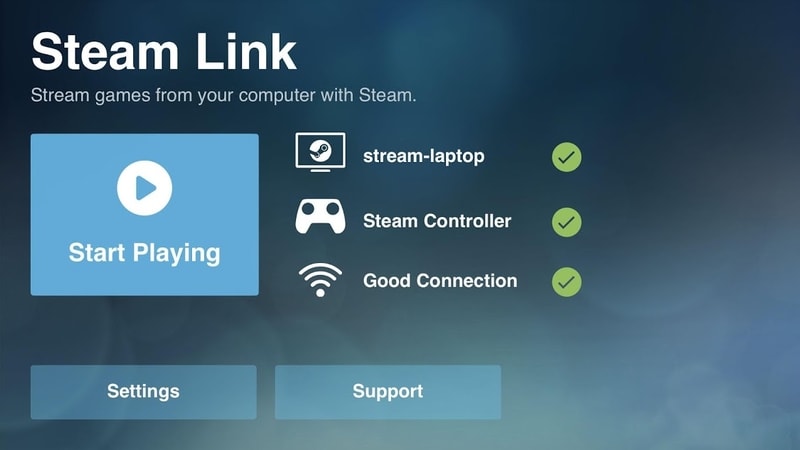 Valve announced its Steam Link app for Android and iOS last month, and soon after, released the app in beta for Android. Steam Link hasn't arrived yet for iOS however, and Valve said its App Store approval was revoked over "business conflicts". Soon after, Phil Schiller, Apple Senior Vice President for Worldwide Marketing, clarified that the Steam Link iOS app as currently submitted to the App Store violated a "number of guidelines on user-generated content, in-app purchases, content codes, etc." He added the Apple was working with Valve to ensure the Steam Link app was compliant with App Store guidelines. Now it appears that Valve has suitably modified its app, with reports of a version available for TestFlight beta testers that aside from UI tweaks since the original beta release also removes the ability to purchase anything from the app.

According to a report by TouchArcade's Eli Hodapp, the revised Steam Link app for iOS became available on the TestFlight platform on Thursday. The report added that the original TestFlight beta for the app was made available in mid-May, with its contentious Steam Marketplace functionality. The revised version of Steam Link currently available to TestFlight beta testers removes the ability to purchase software from the Steam Marketplace, TouchArcade said, with users instead being shown the message - "Available to purchase from your PC", as seen below. There is also no way to add funds to your Steam Wallet, the report elaborated. However, a minor loophole remained - the report's author was able to purchase a PUBG crate key - not technically software - using funds already present in his Steam Wallet.

TouchArcade claimed the single most contentious of the App Store Review Guidelines that the original Steam Link app for iOS violated was 4.2.7 (Remote Application Mirroring), specifically, Section D, which reads "The UI appearing on the client does not resemble an iOS or App Store view, does not provide a store-like interface, or include the ability to browse, select, or purchase software not already owned or licensed by the user. For the sake of clarity, transactions taking place within mirrored software do not need to use in-app purchase, provided the transactions are processed on the host device."

The report speculated that the newly released version of the Steam Link app for iOS on the TestFlight was now in compliance with App Store Review Guidelines. Hodapp explained, "Technically, by the letter of the new Apple guidelines, the Steam Link app is fully in compliance as I bought a key for a crate and not software." Other UI tweaks that the revised version of Steam Link brought included a network performance test when users first paired their PC, the report added.