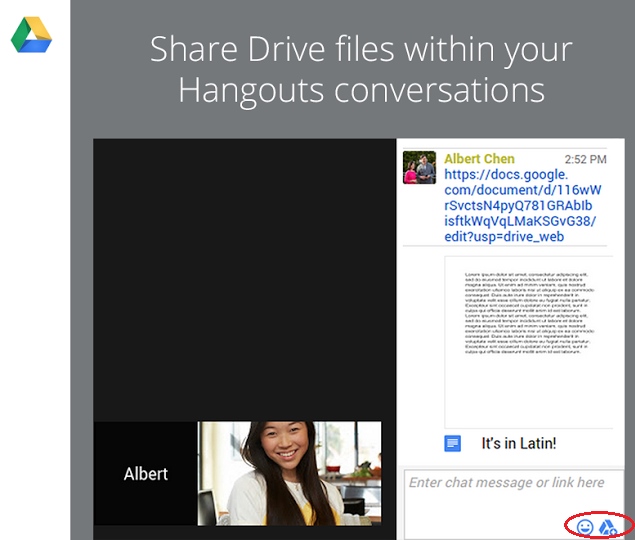 Google on Thursday announced a new feature for Hangouts video calls that allows users to share Drive files without having to leave the conversation window.

During a Hangouts video call, users will see a Google Drive icon on the bottom right corner of the conversation to select the file that they want to share as a link. Upon selecting the file link, the chat window will also show a preview of the file contents, "even when other participants don't have their chat window open."

"When you're meeting with your colleagues remotely you want to get things done quickly, and face-to-face conversation is still the fastest and simplest way to communicate. Today, #Hangouts is making collaboration even easier by letting you share links to Drive files without ever leaving your conversation," noted Google for Work on its Google+ post.

Earlier this month, Google had also announced that it will let people in India use the Hangouts app for mobile devices and the Hangouts in Gmail to make free or low-cost international voice-calls over the Internet.

"Starting today [November 6], the Hangouts app on your phone will help you stay connected with your family and friends around the world in more ways than ever. Now you can make voice calls to phone numbers outside of India on Android, iOS, and the Web from Hangouts in Gmail," said Google India.

The search engine giant revealed that people in India can now call international numbers in the US and Canada for free, while for other countries the rates are "really low."
Comments