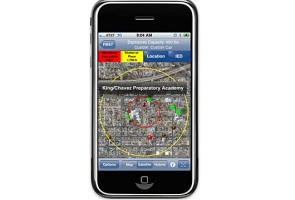 In the first chaotic moments after suspicion of a bomb threat, first responders have a myriad of questions, assessments, and decisions to make, all at once, and all the while the scene could be changing rapidly.

Is the bomb real? How large is the potential blast radius? Where will we evacuate people? Are there any critical infrastructure or special-needs population centres in the vicinity? Any schools, hospitals nearby? What roads should be closed? Which roads should stay open for evacuees? What if they could get all this information in one place?

Now they can: The US Department of Homeland Security's (DHS) Science and Technology Directorate (S&T) and its public and private sector partners have developed a must-have "app": the First Responder Support Tools (FiRST) for computers and smartphones.

The FiRST app provides information directly to first responders on their smartphones or laptop computers in order to quickly define safe distances to cordon-off around a potential bomb location, calculate rough damage and injury contours, suggest appropriate roadblocks and to identify nearby areas of particular concern: schools, hospitals, care centres, according to a DHS statement.

The application also provides the geospatial information with regard to potential injury, glass, or structural damage impact area.

"That's why it works," said Christine Lee, FiRST program manager in S&T's First Responders Group. "Bomb threat scenarios do not reflect a one-size-fits-all approach, and this app allows users to customize information to help them make informed decisions for response."

The FiRST application also includes HAZMAT response information based on the Emergency Response Guidebook (ERG) which includes information on over 3,000 hazardous materials.

FiRST is available to first responders for a nominal fee (about $12 for mobile devices and $100 for Window PC version). The app will be of interest and applicable to anyone who might need to address a potential bomb or HAZMAT spill response, such as industry, HAZMAT transport, or security personnel.