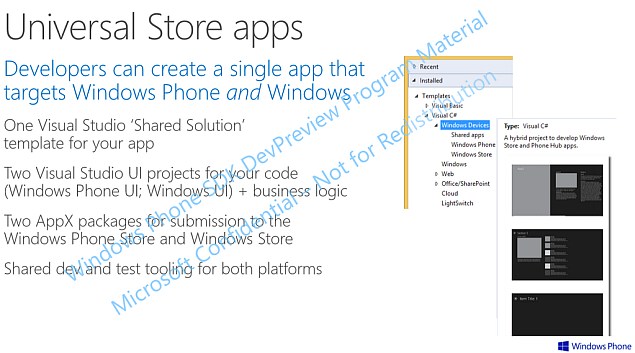 Microsoft's plan to merge its Windows Phone OS with Windows OS by creating common applications for both, may have started to take some shape finally, if the information on purported leaked slides is to be believed, which points to 'Universal Store apps', and 'Converged UI Controls'.

From the leaked images, it can be inferred that developers will be able to create only one app for both Microsoft Windows Phone 8.1 and Windows 8 platforms, with just the size and some interface features being required to be changed to match the different display sizes between devices.

Roman L., the tipster who was also responsible for leaking out the recent Windows Phone 8.1 OS SDK files for developers along with some upcoming features, has now tweeted the two more purportedly leaked slides, attributing them to SDK preview material. One of the slides (above), titled Universal Store apps, states, "Developers can create a single app that targets Windows Phone and Windows."

The slide further describes how a single Visual Studio 'Shared Solution' template for the apps will easily enable developers to port apps, further using separate UI projects. Separate AppX packages will then be submitted to the Windows Phone Store and Windows Store. 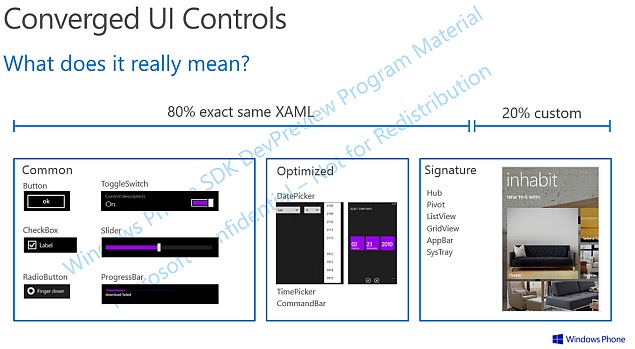 The leaked slide (seen above) further mentions that the "Converged UI Controls" will allow developers to create the 'universal' apps that are made of up 80 percent of the XAML code, with only 20 percent dedicated towards app interface adaptation for both Windows OS versions.

This feature is also expected to ease the work of developers as they will now have to basically create just one app for both the platforms instead of two different versions of the same app.