Ubuntu Linux Distro Now Available on the Windows Store: Here's How You Can Download and Install It 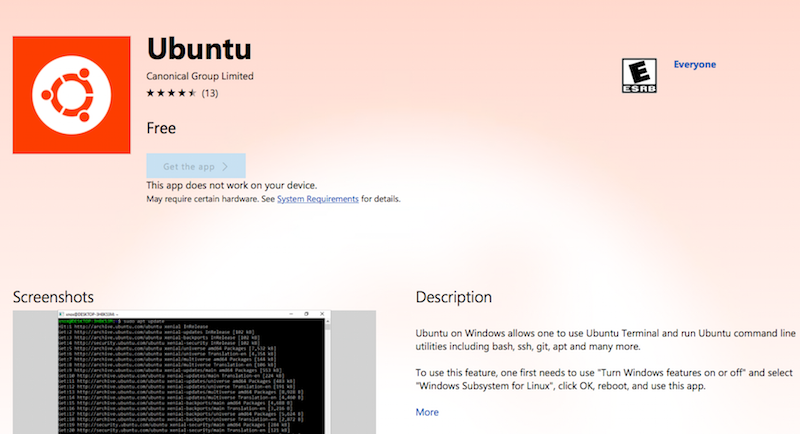 Keeping true to a promise it made during the Build conference in May, Microsoft has now made Ubuntu available on the Windows Store. The popular Linux distribution was already listed in the Windows Store for some back in May, but is now available for all to download and run in Windows 10. Notably, the distro can only be installed by Windows 10 Insider Preview build users.

But before Ubuntu users get too excited, you should know that this version for Windows is sandboxed, which means that you won't get to use all the features of the service, and is limited to running command line utilities like Bash, SSH, GIT, Apt and more through an Ubuntu Terminal.

Setting up and running Ubuntu on Windows 10 is pretty simple. After installing it from the Windows Store, you will need to head to the Control Panel and select the option "Turn Windows features on or off", and then select "Windows Subsystem for Linux." This will allow the Ubuntu app to work after a reboot.

Alternatively, the setup can also be performed using Administrator PowerShell prompt: Enable-WindowsOptionalFeature -Online -FeatureName Microsoft-Windows-Subsystem-Linux. After this is done, you simply need to input "ubuntu" command in cmd.exe or you can launch Ubuntu from the Start menu. Microsoft announced the news in a blog post on Monday, confirming that Windows 10 Insider Preview build 16215 and higher versions will support the installation. As for everyone else, the distro will be installable only after the Windows 10 Fall Creators Update rolls out.

Microsoft had also mentioned back in May that it would bring Fedora and SUSE Linux to Windows Store, and late last month, OpenSUSE and SUSE Linux Enterprise arrived. Adding these Linux distributions is part of Microsoft's plan to embrace the open source community following its decision to bring the Bash Shell to Windows, which resulted in the Windows Subsystem for Linux (WSL).