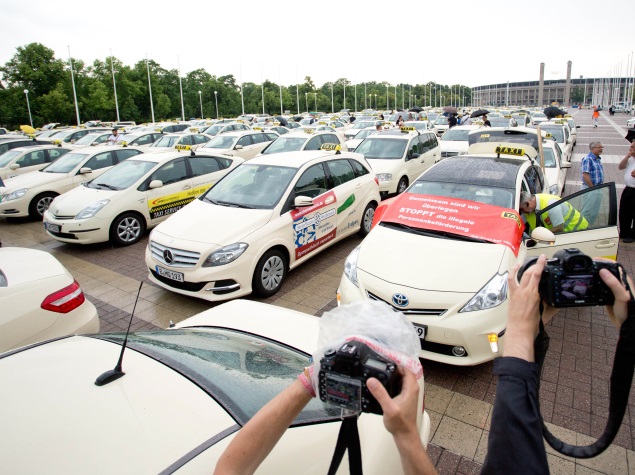 Parisians will be able to share rides with strangers by hailing cars via their smartphones from Friday, when fast-growing U.S. start-up Uber launches its new service in defiance of an imminent legal challenge.

Taxi drivers have complained that Uber has hit their business unfairly as it has expanded rapidly over the four years since its launch. The venture-capital backed firm valued at $18 billion (roughly Rs. 1,10,800 crores) now operates in 25 European cities and has sparked legal cases and taxi protests from London to Rome.

Dubbed UberPool, the service will be added to the Uber mobile phone app in the often traffic-clogged French capital, offering rides from non-professional drivers in their own cars.

But the new service comes only one week before a court challenge brought by rivals over whether it is legal for Uber to offer rides from non-professional drivers in a service known as UberPop.

The Paris Commercial Court is expected to decide whether UberPop, and by extension the new UberPool shared ride service, competes unfairly with rivals such as taxis.

"We obviously take legal processes seriously, and we will respond when needed to court decisions in the countries where we operate," said Pierre-Dimitri Gore-Coty on Thursday, Uber's head of Western Europe.

"But we will never accept to make changes that are against our customers' interests unless we are forced to."

Courts in Berlin and Hamburg have banned Uber's classic limousine pick-up service UberBlack as well as UberPop, the newer service that links private drivers with passengers.

As a result, Uber, which operates in 250 cities worldwide, dropped its UberPop prices in Germany to comply with local rules that say people can share rides but not for a profit. Since that led to fewer drivers being willing to take riders, Uber recently decided to allow regular taxi drivers to book fares on its app.

Gore-Coty acknowledged that UberPop had basically been rendered unattractive in Germany by the courts. "The court decision disincentivised drivers so we are bringing in taxis in a way to solve that problem and show that we are an open platform."

Uber is also bending to another court demand there by applying for an official operators' license, he added.

In France, another showdown is brewing over a taxi and car service law passed in mid-September. The law banned Uber and other car services from using GPS technology to display where cars and customers were located, a key feature of the apps, and said such an approach could only be used by licensed taxis.

It also required drivers of car services to return to their dispatch between fares.

To face the challenges ahead, Uber is flush with $1.2 billion (roughly Rs. 7,390 crores) raised from investors in June, including Google Ventures and Black Rock Inc. among others. The Financial Times last week reported that it was in early talks to raise another $1 billion (roughly Rs. 6,100 crores).

The company's deep pockets allow it to recruit top lobbyists. In September, it named Mark MacGann, the former head of government affairs for NYSE Euronext, as its representative in Brussels, and U.S. President Barack Obama's former campaign manager David Plouffe is on the payroll in Washington D.C.

Gore-Coty said he was optimistic that some countries such as the Netherlands and Spain were taking a more positive view of Uber and other shared-transport schemes.

"The situation is not dark everywhere in Europe as it may seem," said the executive. "Where you have most tension is where the taxi industry has been the most protected, but we are starting to see things move positively."