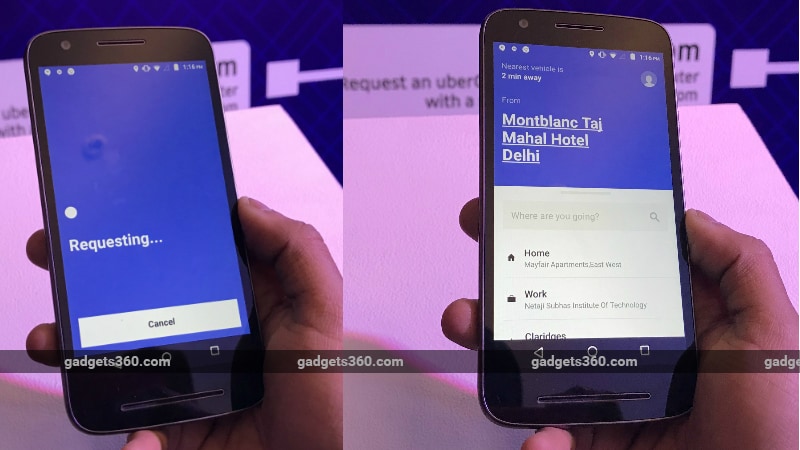 Ride-sharing company Uber has launched its Uber Lite Android app in India. The app is essentially a stripped down version of the main Uber app with basic ride booking features. It saves space with a size of only 5MB, and works on any basic Android phone with even 2G network connectivity. The app is made keeping in mind emerging markets, and India is the first place the company has decided to launch it. Uber Lite has been made available in Jaipur, Hyderabad, and Delhi for now. The app will continue rolling out across India this summer, and in other countries around the globe later this year. Users in these cities can join the waitlist to get early access to Uber Lite.

Keeping India's connectivity issues in mind, the Uber Lite app has a different interface that works for people even with limited data plans. The app has basic features that let you book a ride fast, and get on with your journey. There is no Maps view with real-time car tracking, and this app uses GPS location to find the rider if the network is lost. If it can't detect your location because of GPS or network issues, it guides you to choose popular landmarks nearby. You can then tap the nearby preferred location, instead of typing where you are, and hop into the cab by heading there. Through Uber Lite, users can pay in cash, requiring no card details or Paytm account.

Additionally, the Uber Lite app stores the city's top places in cache so that even when you are offline, no network is needed for them to appear. Furthermore, Uber Lite has built-in learning features that eventually learns your most regular route, and shows it as a first option. This feature is particularly convenient for people with phones with smaller screens. Uber Lite retains in-app support, shows ETA, ride details, and includes critical safety features, such as an emergency button and the ability to share your trip with friends and family.

The Uber Lite app, as mentioned, is just 5MB in size, compared to the regular Uber app, which is 40.45MB (varies with device) in size. Uber claims that Indian languages support including Hindi, Telugu, Bengali and few others will be available sometime in September. This launch also shows the company's commitment in the Indian market. Uber sold off its China and Southeast Asia business recently, and talks of an Ola-Uber merger were also reported recently. However, Uber Lite launch hints that the company is still bullish on India, and doesn't want to give up just yet.

Manik Gupta, Vice President Product, VP and Head of Product, Uber, said, "We have over 75 million monthly active riders, which is a tiny fraction of the world's population. With such a huge growth opportunity outside of the U.S., we are committed to building for the next hundreds of millions of riders. To better serve them, we are doubling down on building and designing products entirely in India - Uber Lite is our biggest launch yet on this journey."