Twitter Ticketed Spaces were first announced in June and allowed a select number of users to test it out. 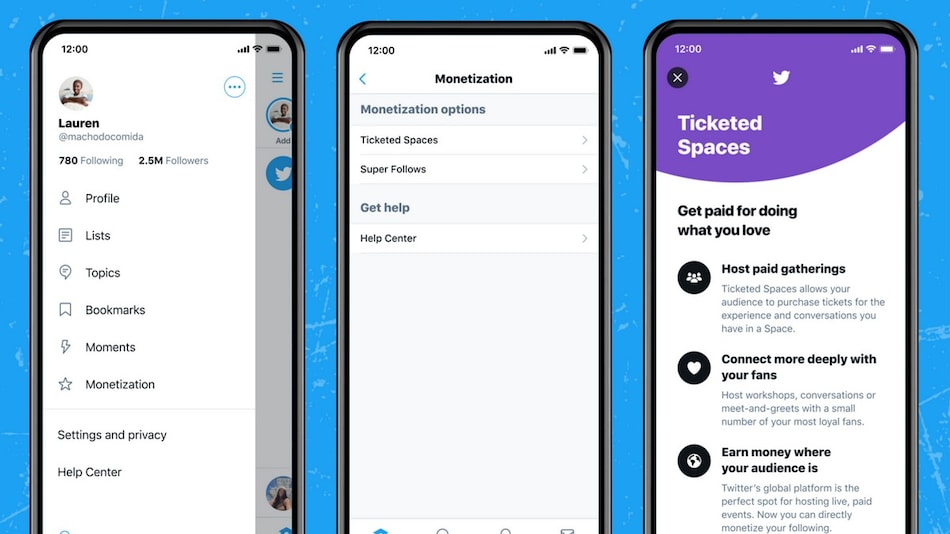 Ticketed Spaces are only available in the US for now

Twitter Ticketed Spaces have started rolling out for iOS users. Ticketed Spaces allow creators to generate revenue from the Spaces — live audio rooms — they host by charging sort of a ticket price. It first announced Ticketed Spaces in June when it opened applications for users who wanted to test the feature. Now it seems like a broader rollout is taking place. Twitter says it hopes to release it for everyone soon. Creators are given up to 97 percent of the revenue earned from tickets purchased to their Ticketed Spaces till they reach a certain milestone.

Twitter though its official Spaces account announced that it is rolling out Ticketed Spaces to iOS users. This will allow eligible users to monetise the Spaces that they host. Creators can charge anywhere between $1 (roughly Rs. 74) and $999 (roughly Rs. 73,500) for their Space of which up to 97 percent will be given to the creator with Twitter keeping three percent. However, after the creator reaches $50,000 (roughly Rs. 36.74 lakhs) in lifetime earnings which combines Ticketed Spaces and Super Follows, they will get to keep up to 80 percent after platform fees on in-app purchases.

Ticketed Spaces allow creators to invite between five and 100 people who can be reminded that a new Space is happening with push and in-app notifications.

In its post, Twitter said that it is “experimenting” with iOS only for now, which suggests that all iOS users may not get access to Ticketed Spaces. And it is unclear when the feature will roll out for Android users.

For now, there is a set of minimum requirements to be eligible for hosting Ticketed Spaces. Creators must be 18 or older. They must have a complete profile with an account name, a bio, a profile picture, and a header image. Their email address should be verified and their account should be secured with two-factor authentication. The account also needs to maintain 1,000 active followers or more and should have hosted at least three Spaces within the last 30 days. Ticketed Spaces are only available in the US as of now.