Twitter’s new Explore tab is available on iOS and Android. 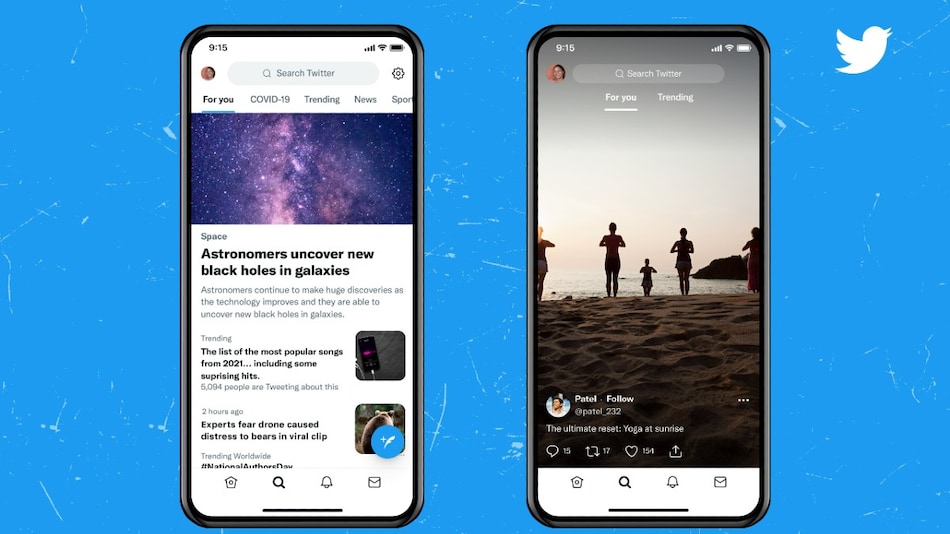 Twitter has rolled out a new TikTok-like Explore tab for users in a limited number of countries. The tab will help users quickly check out the top trending content on the platform. Apart from that, Twitter has also announced that it is testing one-time warnings for users on the photos and videos they share. This feature is currently accessible to only a small number of users. The one-time warning feature enables users to flag their post with Nudity, Violence, or Sensitive labels. Prior to this, users had to mark all their posts as sensitive. Twitter has also mentioned in a recent blog post that they are testing out an overhauled "human-first" approach to reporting content.

Twitter carried out a limited rollout of the new Explore tab on December 8. The Explore tab is now divided into 'Trending' and 'For You' sections. Many users have pointed out the layout resembles that of TikTok. It is also speculated to function similarly, where users simply need to swipe for new content. This feature is currently available in some countries for those who use Twitter in English on Android and iOS.

Along with the Explore tab, Twitter Safety shared a post on December 8 introducing the one-time warning feature. Twitter mentions in the post that it is aware that people use the platform to discuss the happenings of the world, "which sometimes means sharing unsettling or sensitive content." This feature was announced after Twitter had mentioned in an earlier blog post that it is trying a new human-first approach to reporting content. It is being designed to simplify the reporting process for users. This approach is currently being tested with a small userbase in the United States and is expected to be made widely available next year.

Twitter has been hard at work trying to reform its platform but not all the changes have gone down smoothly. It had recently updated its picture permission policy to tackle online abuse. However, this policy change enabled far-right groups to shield themselves from scrutiny and harass anti-racism advocates on Twitter. Twitter has since then accepted that its "enforcement teams made several errors" and is internally reviewing the policy change.

Microsoft Nudges Pirates to Pay, Offers 50 Percent Discount on Microsoft 365 Subscriptions
The Fading of the Platform Giants: Shoppable Video Pioneer Firework Releases Landmark Predictions for Engagement, Ecommerce and the Open Web for 2022 and Beyond