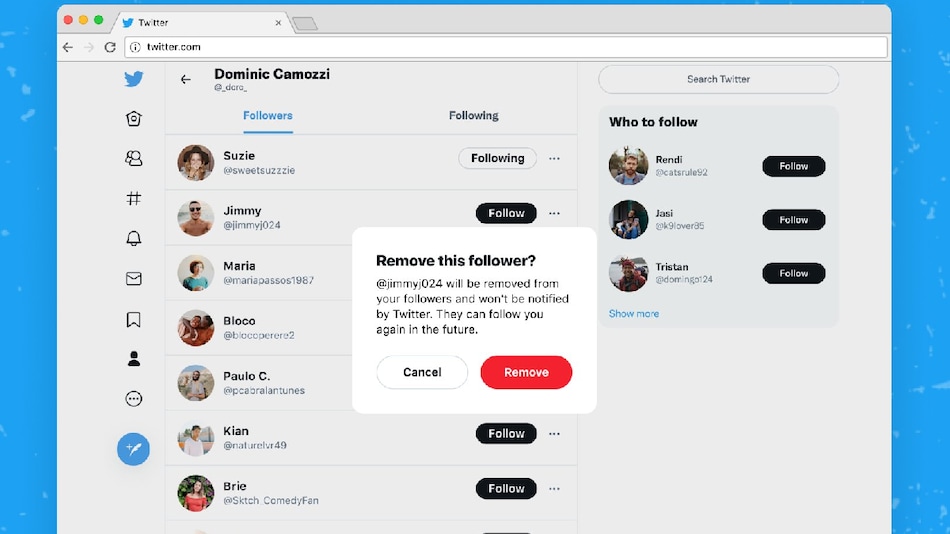 Twitter's new feature will give users control over their follower lists

Twitter is rolling out a new privacy-related feature that lets users remove a follower without blocking them. The latest tool is designed to provide users greater control over their follower lists and is currently available on the Web version. Twitter was testing this option from September this year. Once a Twitter user has removed someone, the user's tweets will no longer automatically appear in their timeline. The social media company states that the followers a user removes using the new tool won't be notified of the change.

Twitter announced the addition of this new feature via its support handle @TwitterSupport on the platform. The microblogging company posted that the latest update would allow users to be the curator of their own follower's list. Twitter users can remove anyone from their list of followers on their profile page. For this, click on Followers, then click the three-dot icon next to a follower's name and finally click on the Remove this follower option. Your tweets will now no longer automatically show up in their timeline. As mentioned, a follower you remove won't be notified of the change.

We're making it easier to be the curator of your own followers list. Now testing on web: remove a follower without blocking them.

To remove a follower, go to your profile and click “Followers”, then click the three dot icon and select “Remove this follower”. pic.twitter.com/2Ig7Mp8Tnx

It's important to note that blocking and removing a follower on Twitter are entirely different. After removing a follower, they won't see your tweets on their feed, but the person will have the option to follow you again if they want. Blocking someone completely cuts off their access to your profile.

Twitter has released a lot of updates recently. The latest feature is part of a range of privacy tools that the company has been working on since September this year. Twitter earlier announced that it is working on a safety feature that would allow users on the platform to temporarily block accounts for a period of seven days for using harmful language or sending uninvited replies. In order to add more social privacy and reduce harassment on the platform Twitter recently begun testing a new tool that allows users to get the vibe of a conversation before they join in. The new ‘prompts' feature will warn users before they get involved in a conversation that could get heated. It will appear below certain tweets on the platform so that the users note it before diving into the replies.