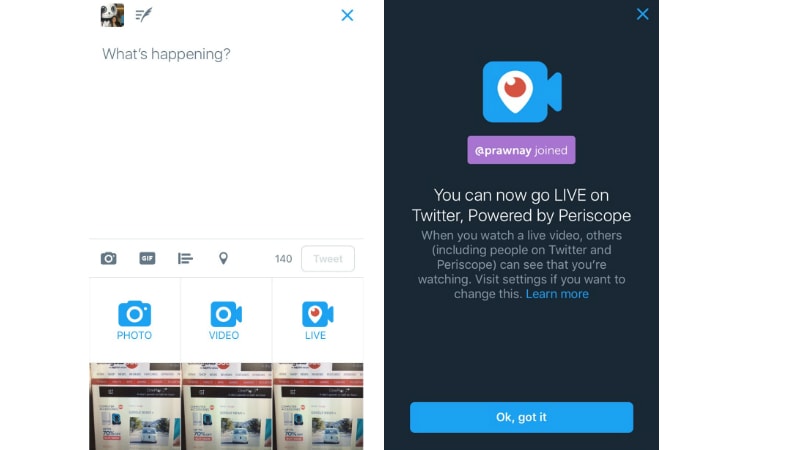 The latest updates of Android and iOS bring this feature to Twitter, and it is already accessible in India. By clicking on the Tweet button, the user will now see three new options for adding media content via the camera. By pressing the Camera button, you now get the option to add photo, video, and start a live video.

Once you click on Live Video, it is live streamed on the Twitter app and website, as well as Periscope. You can stop the broadcast and even save the video on to your phone if you prefer. In a statement about the update, Twitter said, "Periscope was the first to popularise live video and you've been able to view live video in Twitter since January. This update brings the creation and engagement aspects of live video into Twitter natively.

"We started Periscope because we wanted to give people the superpower to share live video with an audience. Bringing this capability directly into the Twitter app is an important step because it brings that superpower to the hundreds of millions of people who use Twitter. Twitter's already the place where people go to see what's happening. With this update, anyone can now broadcast what's happening live," said Kayvon Beykpour, CEO of Periscope in a statement.

Facebook was the first social giant to introduce the live video feature on its app, and Twitter has followed suit. It remains to be seen whether users will adopt this feature as wholeheartedly as they did on Facebook.