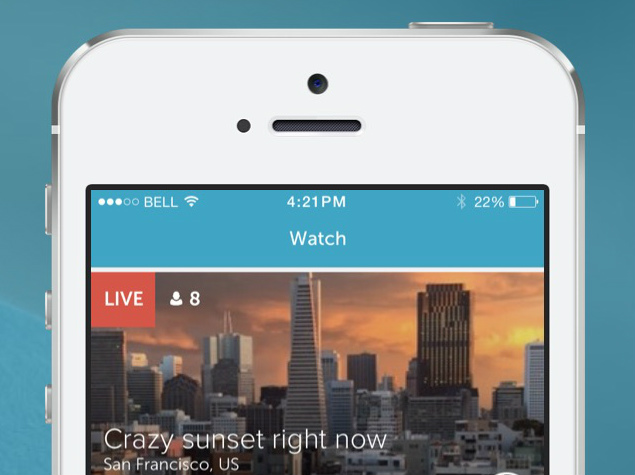 Twitter on Thursday launched the Periscope live video streaming app for Apple's iPhone. This app will be taking on the latest social media sensation - Meerkat. The almost overnight rise of Meerkat led to Twitter users flooding the social network with live video broadcasts.

The social network's acquisition of Periscope lets Twitter provide its own app for the wildly popular live video streaming phenomenon. The social network also blocked Meerkat from pulling users' followers off Twitter. Both these moves hinted at the fact that Twitter didn't want another viral app taking off by piggybacking its network of users.

Periscope now enjoys tight integration with Twitter that Meerkat doesn't. This gives the app a chance to grow its network of users rapidly. The basic premise of the app is that you use your phone's camera to start broadcasting videos live. It then shows the number of people watching the video, with a neat little rising heart animation accompanying every new person who joins.

You can also tap the heart icon to show your appreciation for a broadcast. You can send as many hearts as you like and these help videos make it to the 'Most Loved' section. Periscope also lets you leave comments on the live stream, making it like a live broadcast on YouTube that has a stream of comments alongside.

This ties in very well with what Twitter's about - sharing something that's going on right now. Twitter's six-second video app Vine also took off because of its focus on quick sharing. Just like news stories often appear first on Twitter, Periscope and Meerkat could usher in a new culture where several events are broadcast first on these apps. It's not hard to imagine a scenario where a major event such as a big launch or a natural disaster occurs and live video is being shared instantly on Periscope or Meerkat.

Meerkat was the first to market and is far more popular than Periscope at the moment. But Twitter's backing makes it a lot easier for Periscope to continue growing. The fact that Periscope has a few extra features will help its case. The most important feature is the ability to save videos for offline viewing. Any videos you post on Meerkat also appear on Twitter, which isn't true for Periscope. The latter also has the ability to start a private broadcast, in which you select the people you want to broadcast to.

This isn't the first time a live video streaming service has made the news. Justin Kan's justin.tv became a live video streaming sensation way back in 2007. While justin.tv was shut down last year, its sister site Twitch is still going strong after Amazon acquired it. Meerkat and Periscope have brought the phenomenon to smartphones and it appears users are ready for it.