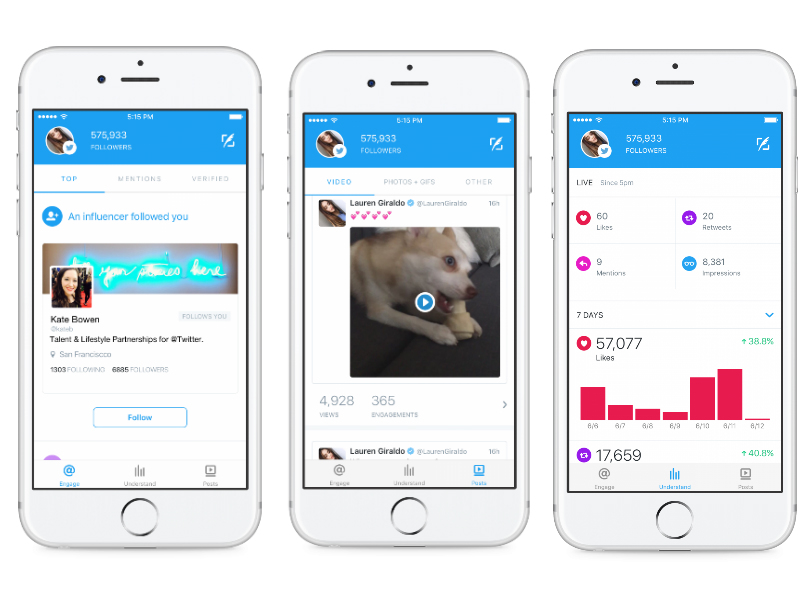 Social media giant has launched a new app called Twitter Engage on the iOS platform. The app is available for download only in the United States right now.

The app is aimed at giving influencers (aka famous people) analytics and data that will help them engage more users into their Twitter conversations. It also streamlines and filters conversations to read tweets that matter.

The Engage app for celebrities has a simple interface with three tabs - Engage, Understand, and Posts. The Engage tab highlights the most important conversations you've had on Twitter, mostly from verified or popular accounts, or users you engaged most with. The Understand tab gives you the performance report of your tweets over time. It lets you assess which tweets and topics get more engagement, as compared to which that don't create the same impact. Finally, the posts tab gives you performance numbers on individual posts.

Engage comes without a Timeline, so the user will have to rely on the regular Twitter app for that. Also, Twitter Engage is aimed at only power users who want to increase their followers, or talk to few people who matter while muting out the other trolls.

Furthermore, the analytics assessed by the Twitter Engage app would be very productive to businesses that operate on Twitter. The useful data that the analytics churn out will help them make better decisions. The Twitter Engage app serves a somewhat similar purpose like Facebook Mentions, but it is open to all Twitter users. Facebook Mentions, on the other hand is only exclusive to verified users.

There is no word on when this app will migrate to other regions outside United States, or when it will hit the Google Play Store. If in the US, you can download the iOS app here.