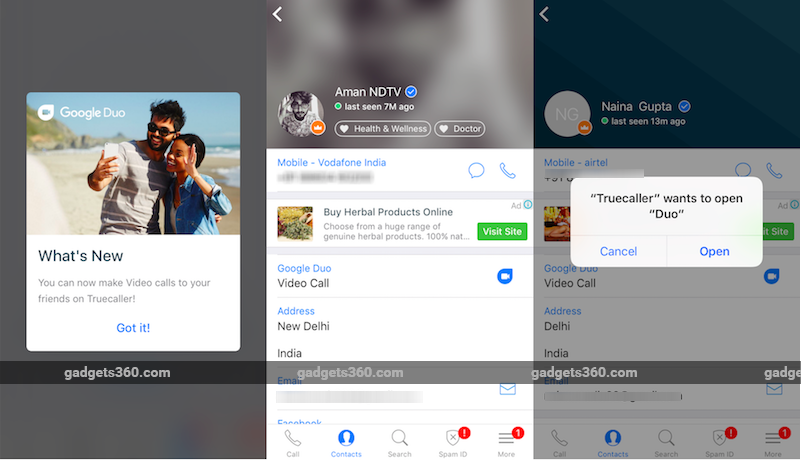 Truecaller on Wednesday released an update for iOS that introduces Google Duo video calling from within the app, a feature the caller ID service had announced back in March following its tie-up with Google. With the latest update (v7.70), users will now be able to make video calls to contacts from within the Truecaller app.

On updating the Truecaller app for iPhone to the latest version, users will now notice the Google Duo video call option in the Contacts section under a selected contact. You already have the option to type messages and make voice calls, but with the new video calling feature, Truecaller hopes to create a service that's more than just a caller ID app, and more along the lines of WhatsApp.

There are a few things to note here. The Google Duo service inside Truecaller will only work after separately downloading the Google Duo app, which seems a bit convoluted, but is perhaps Google's way of adding more numbers to its video calling app. Secondly, the feature is yet to make it to Android, which means iOS users can only use the Duo feature in Truecaller with other Truecaller iOS users on the latest update.

As we mentioned, Google Duo's integration with Truecaller requires users to download the Duo app separately. On trying to make a Duo call within Truecaller, the user is redirected to the standalone Duo app, and one wonders whether users are willing to go through the long process via Truecaller rather than simply doing so via the Duo app. The partnership allows Google to expand the reach of its Duo video calling app to a 250 million strong Truecaller user base, which is perhaps the biggest takeaway for the tech giant here. One will have to wait and see how well the Duo integration works once the feature rolls out to Android as well.

Truecaller earlier this month also rolled out flash messaging for the iPhone that lets users send and receive flash updates that include emojis, clickable links and phone numbers. The feature was first launched with Truecaller 8 for Android in late-March. Notably, earlier this month, Google Duo was integrated with the Android call log.