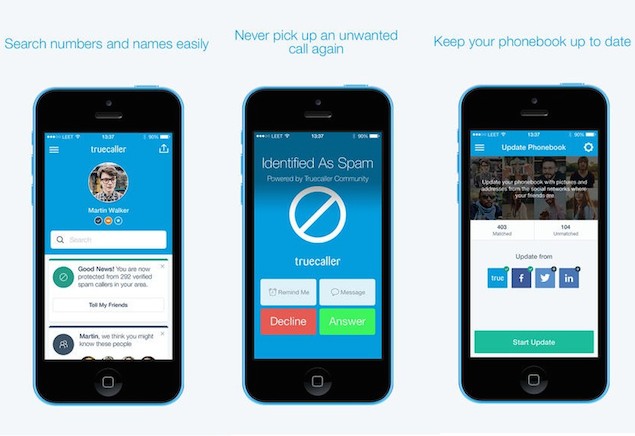 Truecaller has released an update to its iPhone app that brings the Live Caller ID functionality to iPhone. With the integration of Live Caller ID, iPhone owners can check in real time who is calling, even if they do not have the caller's number stored in their contacts. The Truecaller app scans incoming numbers in real time against the crowdsourced database and tries to put a name against each number.

This feature has been available on the Truecaller Android app for a while, but due to limitation of iOS - which does not allow third-party apps to intercept caller data - it was not available in the iPhone app until Tuesday. The developers have figured out a workaround against the limitation of the OS, and this involves taking a screenshot of the incoming call screen (as usual) by pressing the home and power button at the same time. The Truecaller app realises you've performed this action and filters out the number from the screenshot, matches it against the crowdsourced-database, and reads out the name of the caller, all while the call is still ringing. This feature requires a 3G or Wi-Fi Internet connection to be present while the call is incoming.

The service is often used for filtering out tele-marketers and other spam calls, since Truecaller users have the ability to mark numbers as spam - this is where the crowdsourcing comes in handy. Truecaller claims its 55 million users have built the world's largest list of more than 38 million registered spam numbers, and an estimated 75,000 new spam numbers are being added every day by community members.

Truecaller app is available from the App Store as a free download.